The bet on the beginning of the upward movement in gold did not materialize. The price did not manage to pass the level of 1813, under which it consolidated, eventually bouncing off it. The expected rebound from the support at 1791 also did not take place, the quotes broke through this level, and subsequently went below the reversal level of 1773, thereby finally canceling the growth scenario. As a result, the pair practically collapsed, reaching 1710.

Taking into account the changes that have taken place, there is every reason to return to the scenario with the continuation of the downward movement, which probably still has potential. Obviously, one more wave of decline to new local minimums can be expected. 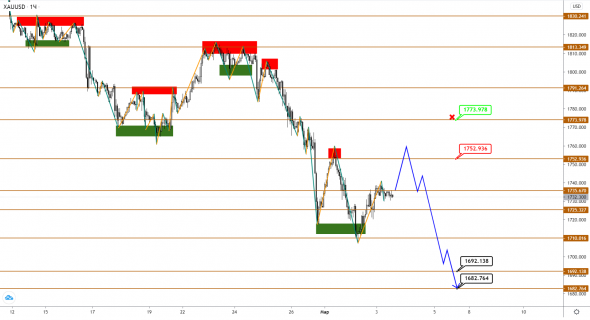 To confirm this scenario, the price needs to confidently gain a foothold in the current area. Probably, this may require a retest of the resistance level at 1752. If the level holds, then the subsequent rebound from it will give sellers a chance to develop another downward impulse with the nearest targets in the area between 1692 and 1682.

Cancellation of the current scenario will take place upon breakout and growth above the pivot level at 1773.

And again, expectations of continued growth in the S & P500 index did not justify themselves. The script was not executed. An attempt to develop the upward momentum failed, as a result the price went down, breaking through the support at 3906 and the reversal level at 3871, and marking in the area between the levels of 3816 and 3784. After that, they began to recover, trading near the signal levels at the moment. 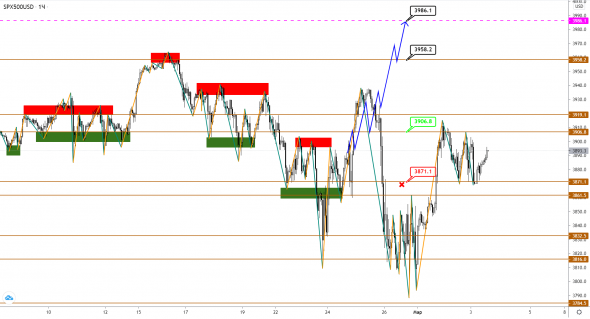 Taking into account all the circumstances, the subsequent return of the price to the area of ​​signal levels does not yet allow canceling the previous scenario. Since the current attempt at recovery may result in a new impulse in the upward movement. Therefore, the previous growth scenario is still valid.

Confirmation of the intention to continue the upward movement will be the fixing of the price stably above the signal level 3871, after which the quotes will have to go above the level of 3906, which will already allow the price to aim at the area of ​​the last maximum from 3958 with a probable passage up to a new peak in the area of ​​3986.