The upward movement in the gold price has been confirmed. As expected, the quotes met resistance at 1865, from where they corrected to support at 1848 and, after its retest, rushed upward, reaching the target zone at 1886 and 1897. Thus, the scenario was fully implemented.

Immediately after reaching the 1897 level, which the price could not overcome, it immediately began to decline, having lost most of its growth. This suggests that, perhaps, there may not be any continuation of growth, and it is possible that the downward movement may resume. 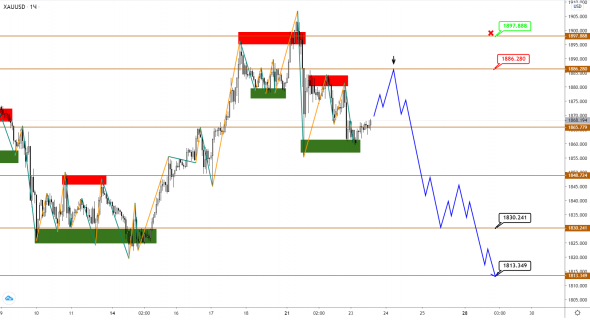 To confirm these intentions, the price needs to gain a foothold in the current area. Probably, this may require a retest of resistance at 1886. If the level holds, then the subsequent rebound from it will give sellers a chance to send gold to local lows with the target area at 1830 and 1813.

In turn, growth and consolidation above the pivot area at 1897 cancels the current scenario.

The S & P500 rose, as expected, having renewed its next record high around the 3729 level. However, the movement took place without preliminary correction to support at 3678, which could not develop. With small pullbacks, the growth continued until a new top was formed. 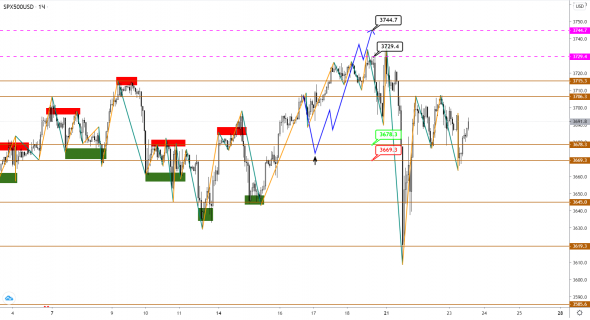 Immediately after a new high was marked, the price dropped sharply to the level of 3619, from where it began to recover again. At the moment, the quotes have won back most of the recently incurred losses, and, apparently, intend to mark a new historical maximum. 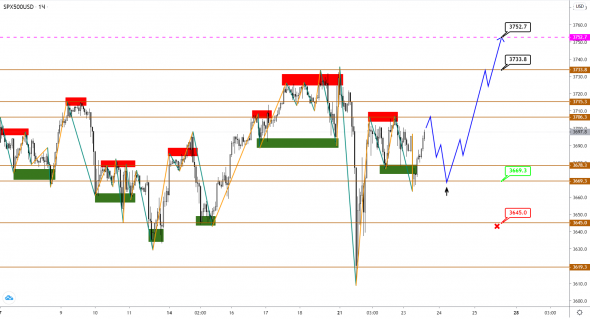 Now, the key for further growth is the resistance area at 3706 and 3715, if triggered, the price may locally correct to the limit zone at 3669, where support is expected. The subsequent rebound from here will already return the index to the growth trajectory and aim at the area between 3733 and 3752.

Cancellation of the current scenario will take place in case of a breakout and consolidation below the pivot level at 3645.