Gold confirmed the forecast for the upward movement of the previous review. At the same time, the expected retest of support for 1679 did not take place. Apparently, the price had already consolidated above the level a little earlier, which resulted in a rapid breakout of the 1692 level, where resistance was expected. As a result, the quotes rose, subsequently reaching the target area between 1725 and 1735, going even slightly higher up to 1744.

Thus, the growth was finally confirmed. The likelihood of continuing the movement that has begun remains high. It is quite possible that after a local correction as a result of a rather strong impulse, this growth will continue to new local highs. 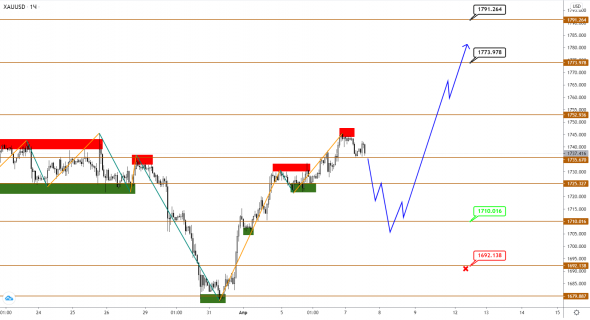 At the moment, it is possible that a local downward correction will develop to the nearest expected support at 1710. In this scenario, a rebound from this zone will become a confirmation of intentions for a new growth impulse, which will direct the price to new local maximums in the area between 1773 and 1791.

Cancellation of the current expected scenario will take place if the price moves below the reversal level at 1692.

The S & P500 rose as expected in the last survey. Moreover, the scale of the movement turned out to be even larger than one might have expected. The price quite confidently entrenched above the support level at 3957, even without the supposed deepening into the signal zone, which could not be ruled out. Nevertheless, the index started almost from the spot, jerkily reaching the target area between 4011 and 4038. After that, it continued to rise, marking around 4085, where it is currently trading. 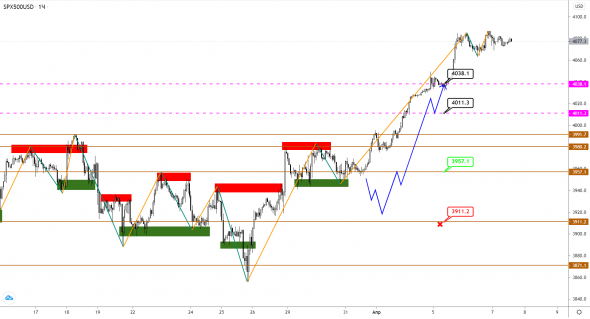 There is no reason to change the bottom-up scenario. There are no signals for a reversal or deep correction yet. It is logical to adhere to the current trend with the expectation of the continuation of the upward movement to the next record tops. 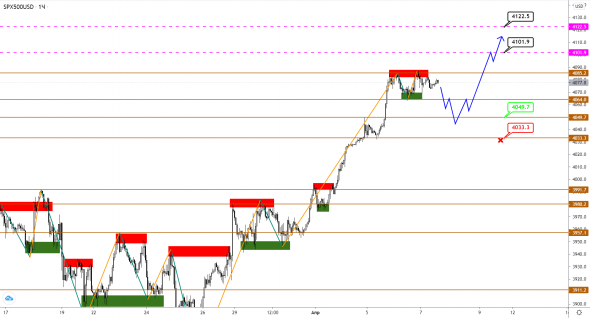 Now the quotes have stopped just below the level of 4085, which was tested twice, as a result of which a local pattern with a double top was formed, which signals the presence of serious resistance here. This may lead to the development of a local downward correction to support, which is expected in the area of ​​4049. The confirmation of the intention for further growth will be a rebound and subsequent impulse, which will aim at new highs in the area between 4101 and 4122.

Cancellation of the current scenario will take place in case of a breakout and consolidation below the pivot level at 4033.