The Canadian dollar did not move according to the expected scenario, delaying the expected local correction, from which it has not yet emerged. Although, of course, in the previous review it was assumed that a rebound from the resistance could take place, followed by a decline to support at 1.2527, which, as a result, happened. Now the pair has already tested it twice and is trying to gain a foothold higher.

Apparently, the current correction is already coming to an end. If the price manages to firmly gain a foothold above the support, then it is quite possible to expect the development of an upward impulse. Therefore, the growth scenario is still relevant. Confirmation of intentions to continue the upward movement will be a firm consolidation in the current price area with a possible retest of the level 1.2527, where the main support is confirmed, which continues to keep the price from further decline. A subsequent rebound from this zone will give a chance for a new upward wave to form, targeting the area between 1.2672 and 1.2729.

Cancellation of the current scenario will take place if the decline continues and consolidates below the reversal level at 1.2453.

Brent crude oil remains unchanged and continues to fluctuate in the range. Since the last review, the price has managed to return to the resistance at 65.63, bouncing off from which it began to decline to the level of 62.00, from where it is trying to recover again at the moment. 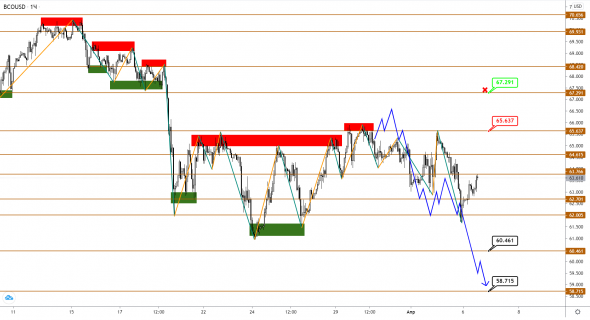 Thus, the formed range is already visible on the chart with the naked eye and became obvious to all market participants. Taking into account the previous wave of decline, this flat is a trend continuation pattern and definitely indicates a pause before a new movement. At the moment, confirmation of intentions to continue the downward movement will be a confident consolidation below the current resistance level at 65.63 with its possible retest and an attempt to go higher. In this case, the subsequent rebound from this level will give an opportunity to form an entry formation, which will be a signal for the beginning of a decline within a new wave, which will aim at the area between 57.77 and 56.67.

Cancellation of the current scenario will take place in case of a passage to the area above the reversal level at 67.29.