Home Trading shcool New all-time high for the S & P500. Is it time to correct?

Gold confirmed the previous expected growth scenario, continuing the earlier started upward movement. To date, both target levels at 1848 and 1865 have been achieved. At the same time, the supposed preliminary retest of support within the local correction at 1791 did not take place. After the breakdown of the signal level at 1813, the price simply continued to move. The script, on the whole, can be considered executed successfully.

The passage above the 1865 level failed. Quotes are now returning below this level, which may indicate the end of the current growth, at least in its current phase. Based on this assumption, we can expect the development of a downward movement, of course, with the confirmation of this intention. 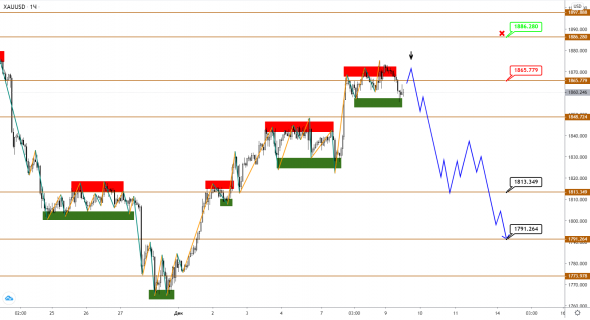 Confirmation of the intention to start the decline can be a confident consolidation below the current level of 1865, which is a resistance. At the same time, an attempt to exit above it should be unsuccessful, and a repeated return under it will give more confidence in the likelihood of a subsequent downward impulse. In this case, the target zone for reaching will be the area between the levels at 1813 and 1791.

Cancellation of the current scenario will take place with continued growth and exit above the reversal level at 1886.

The S & P500 index once again renewed its all-time high, thereby confirming the previous expected scenario. The price continued to rise, by now reaching the target level at 3710. At the same time, the supposed retest of the support at 3619 did not take place, the quotes were stopped already at the level of 3645, which obviously acted as a good support, which allowed developing the subsequent upward impulse. 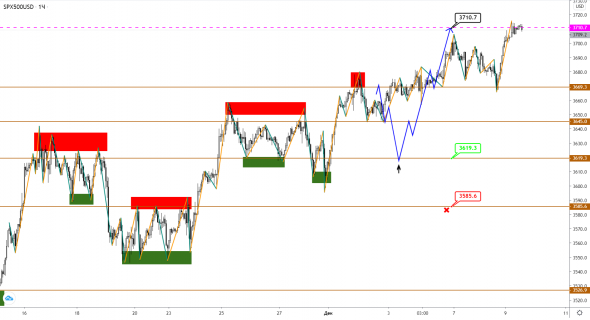 The maximum top of the price is marked at 3715, below which the index began to consolidate, and seems to be forming a base. Subsequently, this may result in a downward correction, which may be confirmed by the inability to continue the rise and rebound down from the resistance. 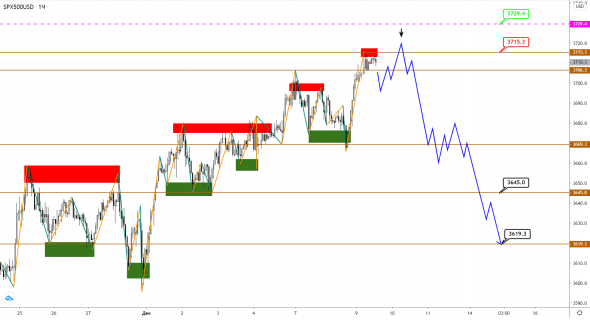 In addition, one cannot exclude another attempt by buyers to break through to a new top above the level of 3715, which, of course, will call into question the expectation of a downward correction. Nevertheless, the confirmation of the current scenario will be a subsequent return under the level of 3715 and a confident move below the intermediate level at 3706 with the formation of a lead-in impulse formation. In this case, the target for movement may be the area between the levels of 3645 and 3619.

Cancellation of the current scenario will take place in case of breakout and consolidation above the pivot level at 3729.