Home Trading shcool Gold is preparing for a reversal, while growth in the S & P500 index is in question

Gold is expected to decline in the predicted scenario. After repeatedly trying to break below the 1725 range border, the price solidified below the 1735 resistance and eventually pushed through that level. Quotes quickly left the flat and headed towards the target area, confidently dropping down to its lower border at 1679.

Upon reaching the 1679 level, the price was stopped. Obviously, there is strong support here, since the previous local minimum is in this zone. Thus, at the moment, gold can form a second bottom, signaling the end of the downward correction and the subsequent reversal. 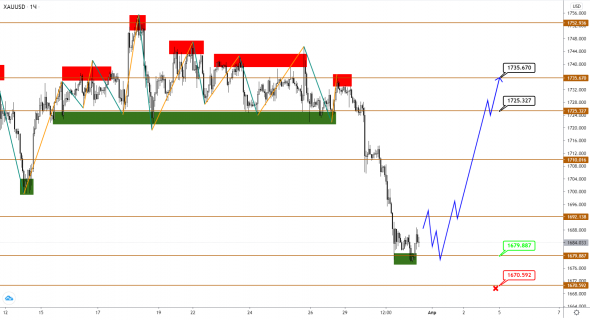 These expectations still require serious confirmation, as the reversal signal is still very weak. The basis for this will be the inability of the price to go below the support at 1679. For this, the price will need to consolidate in the current area with a possible retest of the level of 1679 and a subsequent rebound. In turn, the formation of an inbound upward pattern above the level of 1692 will already give a stronger signal for growth, which will already aim gold in the area between 1725 and 1735.

Cancellation of the current scenario in case of updating the current minimum around 1670.

The S & P500 rose as expected, but the execution of the scenario did not go smoothly. At first, the price actually dropped to support at 3911, but failed to rebound from it. As a result, it fell even lower, up to the reversal level at 3871 and even slightly lower, almost canceling the entire forecast, but stayed higher, starting to rise. However, the index still failed to reach the target area with the update of the record high. 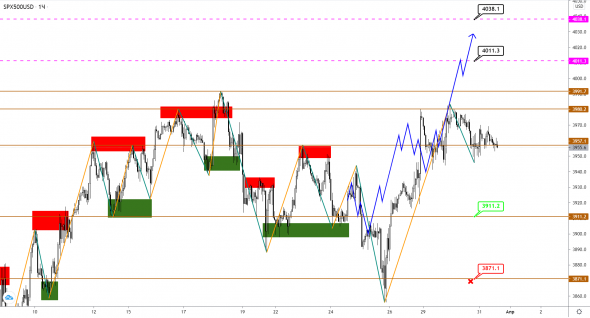 A serious violation of the signal levels took place, but nevertheless, the scenario itself is still not canceled in view of the subsequent return of the price higher. Now quotes are trading slightly below the previous absolute maximum, which raises doubts about the prospects for further growth. However, until the final cancellation of the scenario by the price, it still remains relevant. 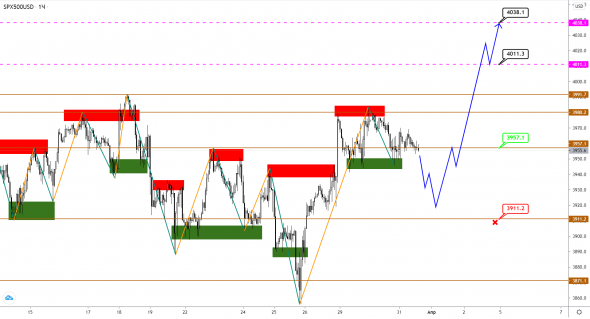 Cancellation of the current scenario will take place in case of a breakout and consolidation below the pivot level at 3911.