Gold still continued to trade within the flat, failing to develop an impulse movement since the last review. The price tried to rise, but was once again stopped around the 1865 level, which brought it back down. Thus, it should be noted that, obviously, there is serious resistance at this level. Also, the quotes were tested twice and the support level at 1830, which they could not pass.

It is absolutely possible to state the current phase as flat, which adds a large share of uncertainty. Nevertheless, taking into account the general context, it can be assumed that the current phase of the local correction could have been completed and the previous decline will continue soon. 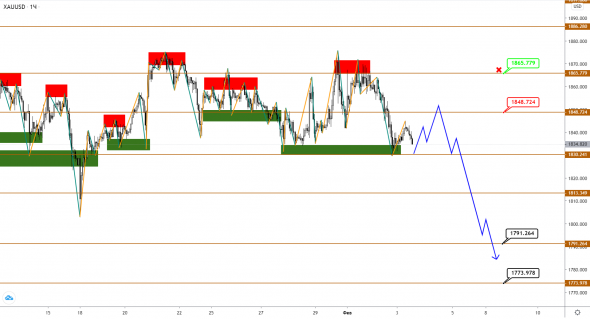 To confirm its intentions, the price needs to confidently break through the lower border of the flat at 1830. Probably, this may require a retest of the resistance level at 1848. If the level holds, then the subsequent rebound from it will give sellers a chance to send gold to local lows with a target area between 1791 levels. and 1773.

In turn, the current scenario will be canceled if the price continues to go up, above the reversal level at 1865.

The next round of growth in the S & P500 index did not take place. Instead, the price began to decline sharply, and thus went not only below the support at 3816, but also broke the reversal level at 3783, which led to the cancellation of the growth scenario. At the moment, the quotes reached the minimum level at 3669, but then they also began to recover sharply, returning to the signal levels. 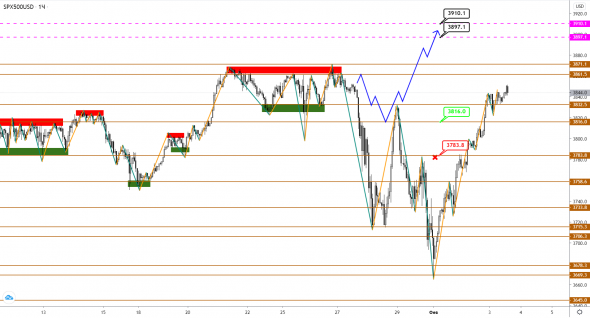 Probably, the decline took place within the framework of the correction, which by now has already completed and the index intends to continue the upward trend to new highs. Therefore, despite the unrealized scenario of the previous review, the scenario with an upward movement remains relevant. 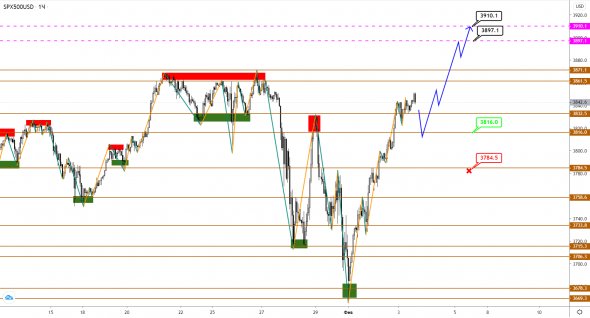 Confirmation of the intention to continue the upward movement will be the price consolidation in the current area with the limit at 3816, where support is expected, and with the extreme border at 3784. The subsequent rebound from this area will give a chance to form an upward impulse with the nearest targets in the area from 3897 to 3910.

Cancellation of the current scenario will take place in case of breakout and consolidation below the pivot level at 3784.