EUR / USDThe pair has completed the formation of the wave (v) of [v] of © of (2), which, as expected, turned out to be short.
A downward impulse is being formed, which is almost completed. The support area is located in the hallway
1.17-1.18 In the basic version, the final diagonal is being formed within the wave [C], wave (2) ended in it, wave (3) began to form, which will be a zigzag. In the case of an inflationary scenario in 2017, wave [IV] in the global diagonal. Long-term growth began towards 1.60. Now there is a wave (III) of A of [V]… In this case, the current decline will not be lower than 1.15-1.14 and while this option may work.

Locally, the pair forms a downward impulse, in which there is a wave [iii]… it needs another approach down, after which there will be a slightly stronger rebound, but not higher than 1.22 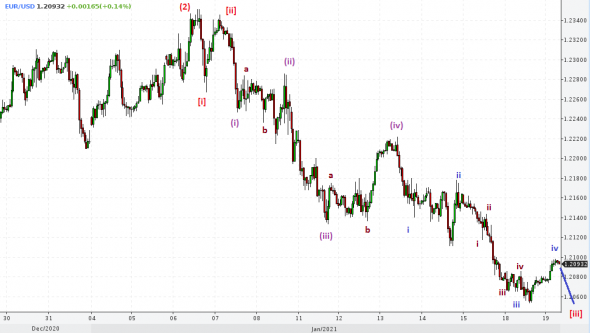 GBP / USDThe pair is completing the formation of a wedge, which can complete wave 2 of a larger order. In the wedge, the 5th internal wave in the direction of 1.36-1.37 is being completed or completed. Wave 2 enters a long-term wave structure [5] towards 1.10. Its structure is the final diagonal. It is necessary to break through the zone 1.31-1.32.

USD / JPYThe pair completed the triangle within the wave B. There was an exit downward in the direction of 98-99 within the formation of wave C of [y] of (B). In wave C, an initial diagonal is formed, which is an internal wave (1), a corrective rebound is expected, but not higher than 107. A bullish divergence is formed.