The Canadian dollar continued to decline, as expected in the previous survey. At the same time, the rebound from the resistance at 1.2672 did not take place, the pair went up to the reversal level at 1.2729, where it had already met the main resistance and rebounded, starting a decline. Now quotes are trading halfway to the target area, which has not yet been reached.

The target area is saved as the main area. Reaching this price zone is probably only a matter of time. The scenario for the continuation of the decline remains relevant. 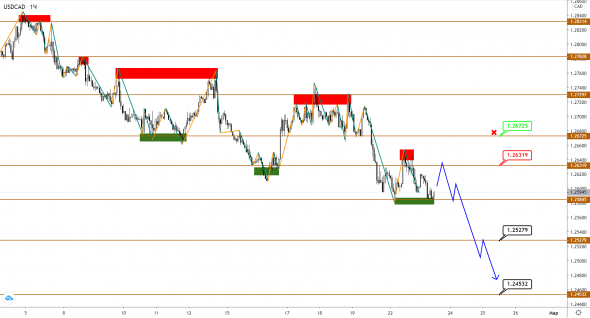 Now the pair needs to gain a foothold in the current area to confirm their intentions. This will probably require testing the current resistance level, which is supposed to be at 1.2631. If successful, we should expect a rebound from this zone, followed by a decline to the target area between 1.2527 and 1.2453.

Cancellation of this scenario will take place with continued growth and consolidation above the reversal level at 1.2672.

Brent crude oil is expected to continue its upward trend. Once again, the target area between 64.61 and 65.63 was reached with preliminary consolidation above the support at 62.70, from where a new impulse began. Subsequently, the price, having dropped, once again tested the support, followed by a rebound and growth to a new maximum, thereby confirming its strength. 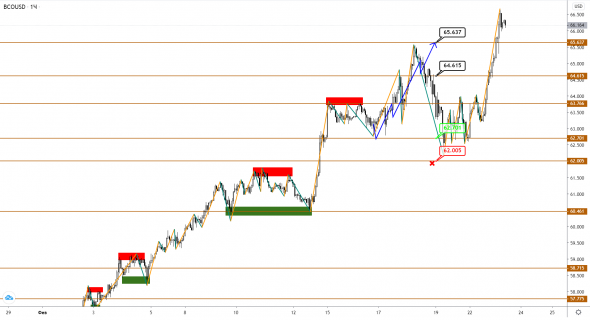 At the moment, the price is already trading in the area of ​​66. And, quite possibly, the growth is still in force for the continuation and entering new highs. Therefore, the previous scenario for an upward movement remains valid. 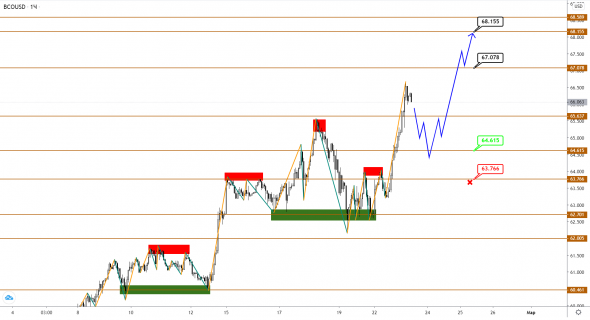 Confirmation of the current forecast will be the ability of prices to gain a foothold in the current area. At the same time, in the event of a local correction, the main barrier will be the support level at 64.61, which will support quotes and hold back further decline. In case of a retest and a successful rebound from this level, there is a chance of forming another upward impulse with a target area between 67.07 and 68.15.

Cancellation of the current scenario will take place if the decline continues to the area below the pivot level at 63.76.