Home Trading shcool Brent almost finished it off, and now seems to be hinting at a correction

The Canadian dollar continued to strengthen against the US dollar, as expected in the previous survey. At the same time, the expected retest of resistance at 1.2993 did not take place. The pair consolidated for a short time around the level of 1.2926, broke through it, and continued to decline in the direction of the target levels, reaching first to the first level at 1.2883, after which it plummeted to the second level at 1.2803. Thus, the script is considered to be successfully completed.

Upon reaching the level of 1.2803, the price went even slightly lower, to the next level at 1.2782, where it stopped. Obviously, a strong support zone is located in this area, because after a sharp rebound, quotes are trying to overcome it again, but so far they have not been able to do this. Probably, we can tentatively conclude that at the current moment the downward movement could be completed and the time has come for an upward correction. 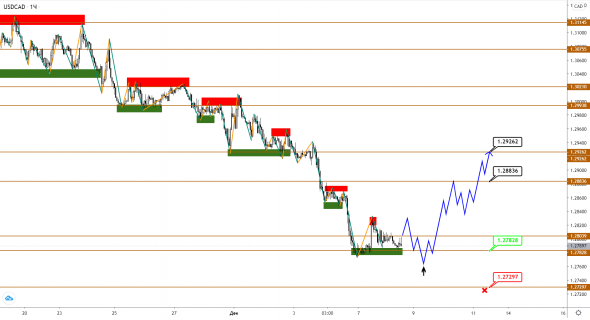 This scenario can be confirmed by the consolidation of the pair in the current area. At the same time, with a permissible drift into the area between the support at 1.2782 and the reversal level 1.2729. In turn, a return above the support will signal the beginning of the development of an upward movement with the nearest targets in the area between 1.2883 and 1.2926.

Cancellation of this scenario will take place if the decline continues and consolidates below the reversal level at 1.2729.

The expected rise in the Brent price has taken place and even the local maximum has been updated. The price almost reached the 50 mark, stopping slightly lower by a few points. Therefore, in general, the price went according to the assumed scenario, but did not reach the target levels, starting to decline. It is likely that the price will most likely get to the first target point at 50.34, which is perhaps only a matter of time. 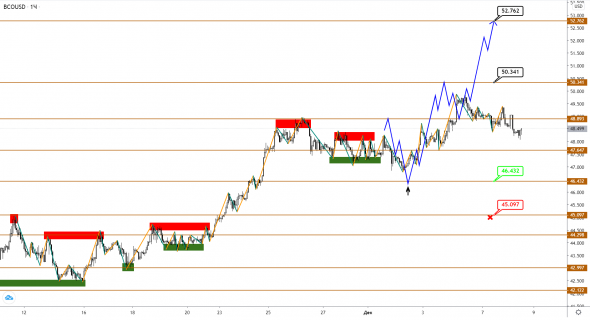 However, given the context, there is a non-zero probability that quotes are likely to approach their local top, after which a downward correction is likely to develop. 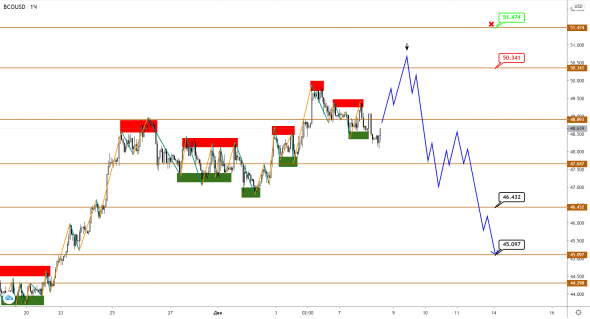 In this case, the important thing will be how the important zone around the 50 mark will be traded, which, in turn, is a psychological mark for many market participants. Confirmation of the current scenario in case of growth will be a rebound from the area between 50.34 and 51.47 with the formation of a downward entry formation and a return under the level of 50.34. This will aim quotes in the area from 46.43 to 45.09.