The continuation of the upward trend in the Australian dollar took place, contrary to expectations. The pair marked its top at the level of 0.80, after which it began to decline rapidly, thereby not only breaking through the support at 0.7934, but also going well below the pivot level at 0.7894, reaching the 0.7700 mark. And now he is trying to recover recent losses.

The nature of the movement, a confident violation of the signal levels, unambiguously indicates the beginning of an impulsive downward movement within the framework of the correction of the higher order. Thus, the current price recovery can be regarded as a local upward correction, after which the decline will resume. 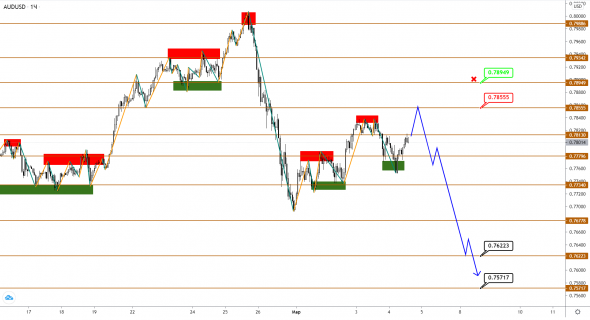 At the moment, it is possible to continue the local correction with the update of the local maximum with a limit in the area of ​​the expected resistance level at 0.7855. The test and subsequent bounce from this zone will signal the beginning of a new phase of the impulse decline with the targets of the area between 0.7622 and 0.7571.

Cancellation of the scenario will take place in case of growth and consolidation above the reversal level at 0.7894.

Likewise in the New Zealand dollar. The expected rise to new highs did not materialize. The pair began to decline, breaking through the support at 0.7390, and practically without stopping, it confidently overcame the reversal level at 0.7354, below which it subsequently consolidated, reaching 0.7219 at the moment. At the moment, the pair went into consolidation, trading within the boundaries between 0.7300 and 0.7219. The very rapid decline, accordingly, signals the beginning of the phase of the downward movement, within which one can confidently assume at least one more wave of decline. 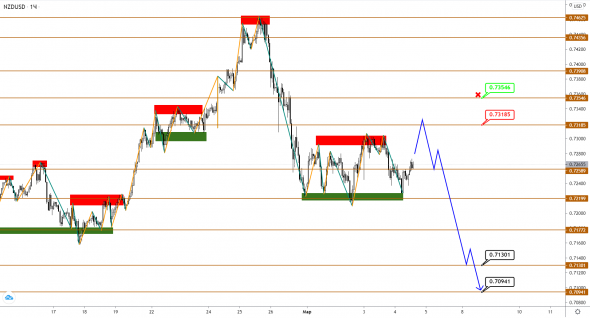 Confirmation of the intention to continue the downward movement will be the ability of the price to gain a foothold in the current area with a probable retest of the resistance level expected at 0.7318. In the event of a subsequent rebound from this zone with the formation of a lead-in impulse, the pair may aim to the lows in the area between 0.7130 and 0.7094.

Cancellation of the current scenario will take place in case of growth and consolidation above the reversal level at 0.7354.