Home Forex strategies Who and how increased the money supply in 2020?

Much has been said about the fact that the United States has turned on the “printing press” at full capacity this year. In comparison with other major economies, this is indeed the case. And what the change in money supply in the other two largest economic entities – China and the EU – looked like in 2020 is shown in the graph. In addition to them, Russia has been added. The data is up to November 2020. It should be noted that in China and Russia, the growth in the money supply was partially offset by the rise in prices (annual inflation in China, for November, was about 3%, in Russia – 4.4%), while in the USA and the EU the monetary the mass has not yet provoked a rise in prices (inflation in the US over the same period is 1.2%, in the EU – 0.9%). The United States is the undisputed leader in money emission (which affected the dynamics of the dollar and the growth of the stock market), the EU and Russia, adjusted for inflation, are about the same. China, especially considering inflation, printed almost no new money. 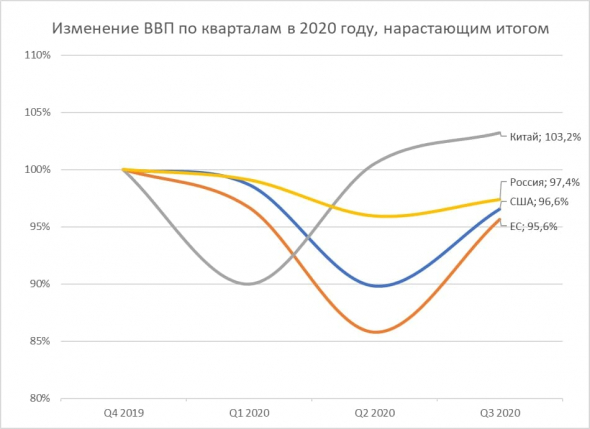 Has the contribution of increasing the monetary base to the GDP recovery become important? China with the lowest monetary pumping, at the end of 3 quarters of 2020, has a GDP growth of + 3.2% compared to the end of 2019. The United States, the EU, Russia – a decline in GDP: -3.5%, -4.4%, -2.6%, respectively. Especially when comparing the US and the EU, the relationship between economic dynamics and the dynamics of the money supply cannot be established unambiguously.