The euro was unable to fully develop the upward movement, stopping halfway, at the level of 1.2174, from where it turned around and began to decline. The target area remained unreached, the scenario was not implemented. The pair is now trying to recover from the recent decline, returning above the signal levels again.

Despite the attempt to start growth again, the pair still shows weakness in the development of the impulse, which may be a signal for a possible start of a corrective decline. Therefore, upon confirmation of this scenario, it will become a priority for the near future.

Forecast: the beginning of the downward movement 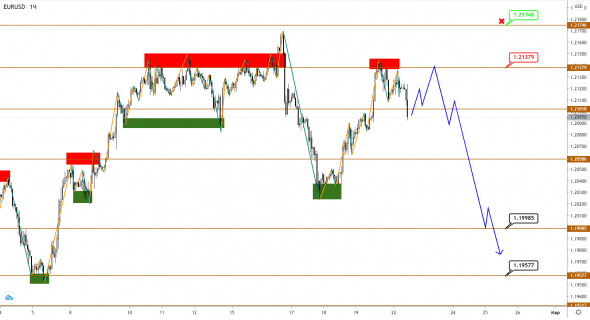 Now the price is trading within the emerging wide sideways trend, the exit from which may take place downward. This scenario will be confirmed by the price’s ability to consolidate in the current area with a possible retest of the resistance level at 1.2137. The subsequent rebound from this zone may contribute to the formation of a downward impulse in the area between 1.1998 and 1.1957.

Cancellation of the current scenario will take place upon breakdown and growth above the pivot level at 1.2174.

The British pound rose in line with expectations and worked out the target area between 1.3955 and 1.4019, thus fully fulfilling the expected scenario. Before that, the price corrected to support at 1.3860 and after a confident consolidation began to grow rapidly. Now the price has slightly decreased, having bounced off the level of 1.4019. 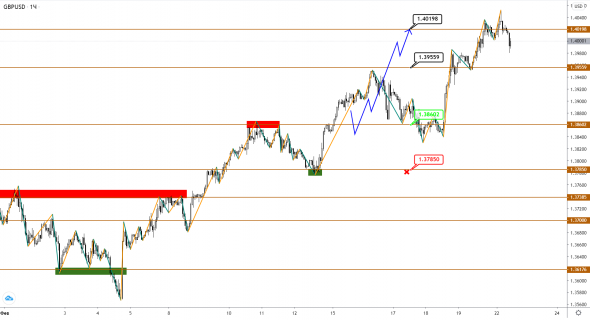 Now we cannot completely exclude the possibility of continued growth. Nevertheless, one can already assume that the price is approaching its top and the price reversal is not so far. In addition, the rebound from the last top hints at a possible exhaustion of upward momentum.

Forecast: the beginning of the downward movement 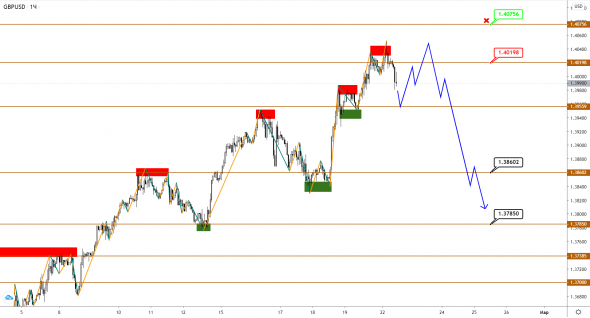 Confirmation of the scenario at the beginning of the decline may be the price fixation in the current area with a retest of the zone between 1.4019 and 1.4075. In this case, a subsequent return under these signal levels will start the beginning of the downward correction of the higher order. In turn, a confident consolidation below the resistance at 1.4019 may contribute to the formation of a downward impulse in the area between 1.3860 and 1.3785.

Cancellation of the current scenario will take place upon growth and consolidation above the reversal level at 1.4075.

Growth expectations were confirmed against the Japanese yen. The pair did continue to rise after the previous reversal, reaching the target area between 105.99 and 106.40, albeit without a preliminary retest of support at 105.06. The script is fully implemented. At the moment, the price has slightly decreased within the local correction. 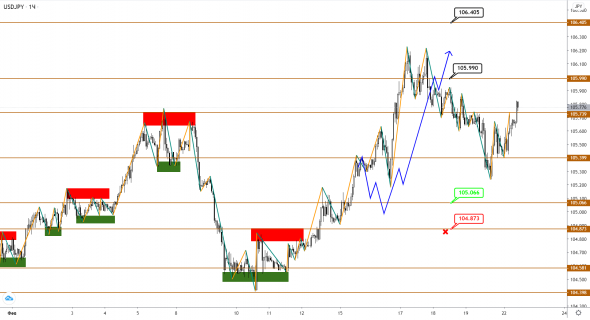 The guidance for an upward movement remains in effect, and after the end of the current local correction, a resumption of the upward movement to a new target area can be expected. Now the pair is again approaching a level that may provide resistance, preventing it from moving higher. This could lead to a local correction, the limits of which may lie between the levels of 105.73 and 105.39, where the main support zone is expected. In the event of a retest and a rebound from this zone, there is a chance for a new upward impulse to develop, which will target new local highs in the area from 106.70 to 106.96.

Cancellation of the current scenario will take place upon breakdown and consolidation of the pair below the pivot level at 105.39.