The Canadian dollar did not follow the expected scenario, but the scenario itself was not canceled. The pair was stuck in the range between 1.2584 and 1.2729, failing to develop an impulse movement. Thus, the target area was not reached, but there was no cancellation either, since the price held above the signal levels.

Visually, the current picture may indicate a pause after a rapid impulse, which is likely to result in a lead-in formation preceding the next upward impulse. Therefore, the previous scenario for growth with the same goals remains valid for now. 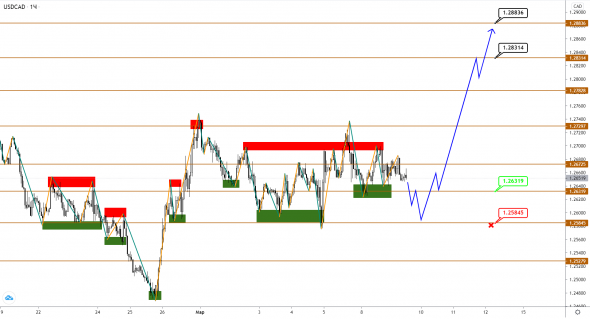 Now the pair needs to gain a foothold in the current area to confirm their intentions. This will likely require testing the current signal zone between 1.2631 and 1.2584. If successful, we should expect a rebound from this zone with a subsequent rise to the target area between 1.2831 and 1.2883.

Cancellation of this scenario will take place if the decline continues and consolidates below the reversal level at 1.2584.

Brent crude oil continued its growth, despite the assumptions about the formation of a local top. The correctional decline scenario was thereby canceled. The price after the correction in the area of ​​63, having pushed off, began to grow, subsequently breaking the previous top at the level of 67.56, after which it practically grew to the level of 72, from where it turned sharply and began to decline. 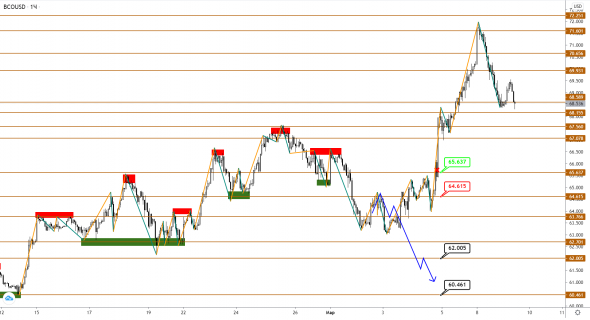 Despite the cancellation of the scenario with a decline within the correction, the latest behavior of the price, which has already dropped to 68, may be evidence of the formation of a new top, from where a downward correction can begin, which can be confirmed in the coming days. 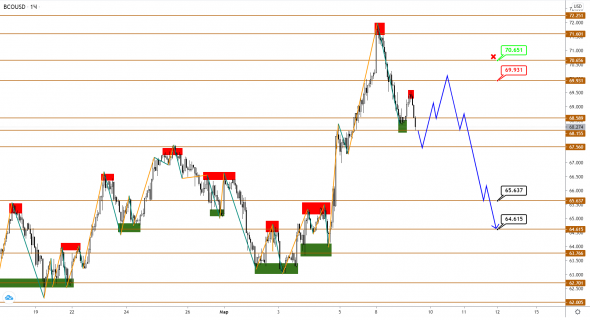 This forecast will be confirmed by the ability of prices to gain a foothold in the current area. At the same time, in the event of a local correction, the main barrier is the resistance level at 69.93, which can restrain the price from further growth. In case of a retest and a successful rebound from this level, there is a chance of forming another downward impulse with the target area between 65.63 and 64.61.

Cancellation of the current scenario will take place if the growth continues to the area above the reversal level at 70.65.