The Canadian dollar has weakened as predicted in the last survey. The growth that had begun, as expected, continued to move in the same direction, but lost significantly in pace, starting to consolidate with a slight upward bias. This allowed the pair to move slightly higher to 1.2631, but was not enough to reach the target area at 1.2672-1.2729.

Despite the price deceleration, the pair is still trading steadily above the signal support zone at 1.2527, which allows us to expect the current movement to continue. Therefore, the scenario with continued growth is still valid. Confirmation of intentions to continue the upward movement will be a solid consolidation in the current price area with a local correction and retest in the range between 1.2527, where the main support is expected, and the level of 1.2453. A subsequent bounce from this zone will give a chance for a new upward wave to form, targeting the area between 1.2672 and 1.2729.

Cancellation of the current scenario will take place if the decline continues and consolidates below the reversal level at 1.2453.

Brent crude continues to fluctuate in the previous range amid uncertainty and anticipation of directional stimulus. The expected decline at the moment took place, the price dropped down to the level of 61, but the acceleration taken was not enough to reach the target area, which was located slightly lower at 60.46. Thus, about 50 points were not enough for working off. From this zone, the quotes turned around and headed towards the resistance at 65.63, where they are traded at the moment. 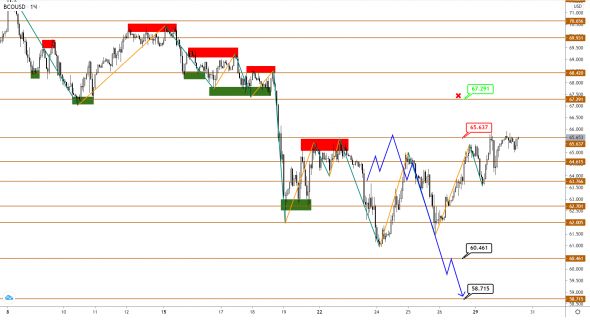 The chart shows how the current resistance at 65.63 does not allow the price to go higher, thereby developing a strong upward movement, which may become the upper border of the current flat. If the level holds, then the price has every chance of a reversal and further decline as part of a large correction. Therefore, this scenario remains relevant. 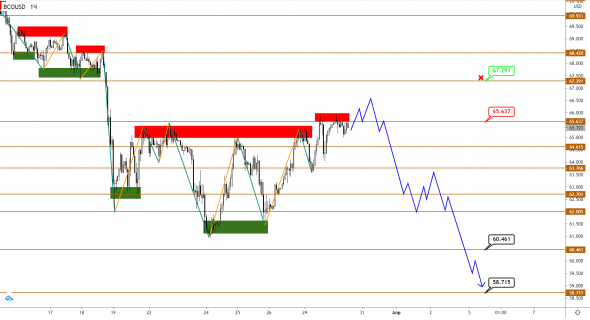 At the moment, confirmation of intentions to continue the downward movement will be a confident consolidation below the current resistance level at 65.63 with its possible retest and an attempt to go higher. In this case, the subsequent rebound from this level will fully form an entry formation, which will give a signal to start a decline within a new wave, which will aim at the area between 60.46 and 58.71.

Cancellation of the current scenario will take place in case of a passage to the area above the reversal level at 67.29.