The assumptions about the continuation of the decline in the last survey were confirmed. Gold indeed continued its downward movement, albeit without a preliminary correction to the resistance at 1752, thereby completing the target area between 1692 and 1682. Thus, the scenario can be considered successful.

Immediately after reaching the level of 1682, the price stopped, and then began to reverse and grow, having won back part of the decline. This may hint at either a local development of an upward correction, or a full-fledged upward reversal due to the end of a downward correction. It can be assumed that at least one more upward wave can be realized. 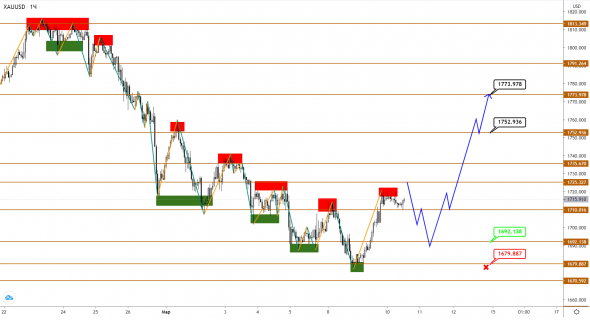 To confirm this scenario, the price needs to confidently gain a foothold in the current area. Probably, this may require a retest of the support level at 1692. If the level holds, then the subsequent rebound from it will give buyers a chance to develop another upward impulse with the nearest targets in the area between 1752 and 1773.

Cancellation of the current scenario will take place in case of breakdown and decline below the pivot level at 1679 with the renewal of this minimum.

The assumptions about the growth in the S & P500 index did not come true again. The script was not executed. It was not possible to gain a foothold in the signal zone, as a result, the reversal level 3871 was broken and the price went lower, at the moment it reached the level of 3733, where the impulse was stopped. The quotes tested it and consolidated higher, bounced back and began to grow, regaining the previous losses. 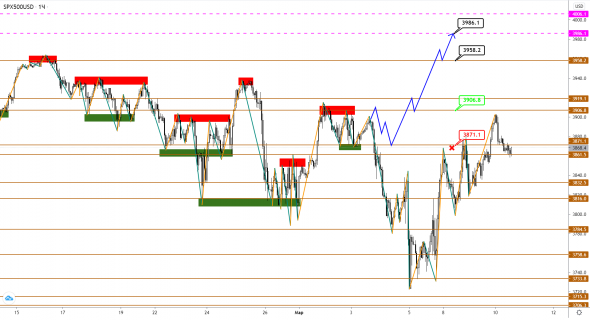 Obviously, the index is trading in a certain range within the developing corrective phase, after which the upward movement has every chance of further development. Therefore, despite the unfulfilled previous scenario, growth expectations are still valid. 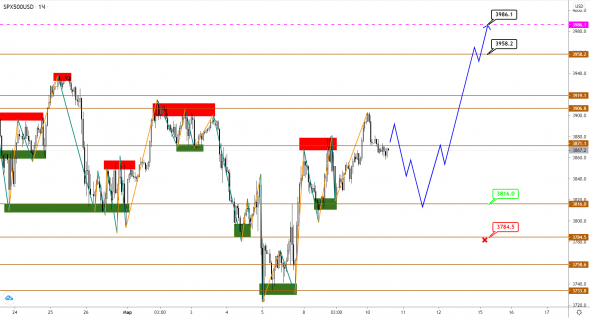 Confirmation of the intention to continue the upward movement will be the price fixing in the current area with a probable correction to the support level at 3816, which will allow the entry impulse to be completed. The subsequent rebound from this zone will already aim the index to new highs in the area between 3958 and 3986

Cancellation of the current scenario will take place in case of a breakout and consolidation below the pivot level at 3733.