The Australian dollar continued its upward movement in line with the expected forecast in the latest review. The target area was reached, so the script ran completely successfully. The pair confidently consolidated above the 0.7571 level, which it confirmed as a support, having tested and subsequently rebounded from it with the development of an upward impulse.

Upon reaching the target area, the quotes continued to grow, significantly exceeding it and reaching the level of 0.7813, where they were stopped, with the formation of a pattern similar to a double top. Apparently, the pair has reached its maximum within the trend and is preparing to start a downward correction of the senior order in the medium term. 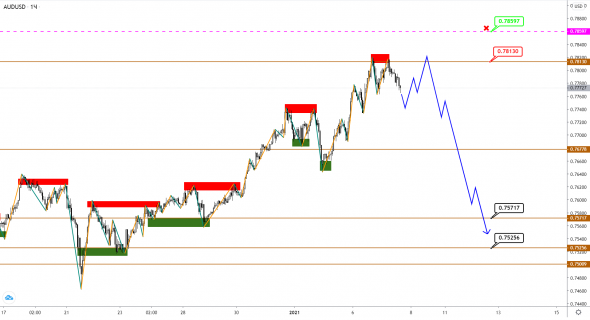 Confirmation of these expectations will be a confident consolidation in the current area with the formation of clearer topping signals, one of which may be a retest of the resistance level at 0.7813. A subsequent rebound from it will give the price more room to start declining to the nearest target area between 0.7571 and 0.7525.

The scenario will be canceled if the last high is updated and the price moves above the reversal level at 0.7859.

The situation is similar in the New Zealand dollar. As expected, the upward movement took place, the scenario was fully worked out successfully. The pair has firmly entrenched above the support level at 0.7094, having tested it twice and rebounding thereafter. This made it possible to form a confident upward impulse to the target area between 0.7219 and 0.7275 with a passage slightly higher to the 0.7318 level. 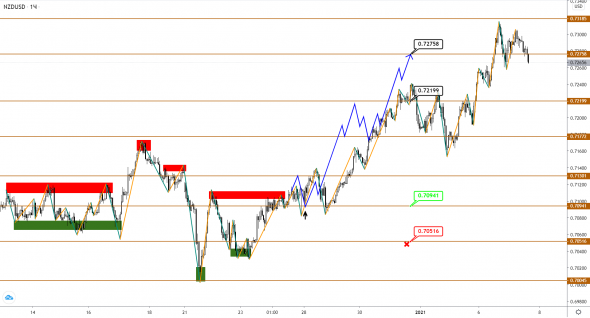 As in the Australian dollar, the first signs of an uptrend exhalation and preparation for a downward correction are also visible in this pair, although not as clear-cut. Therefore, a clearer signal is required for confirmation. 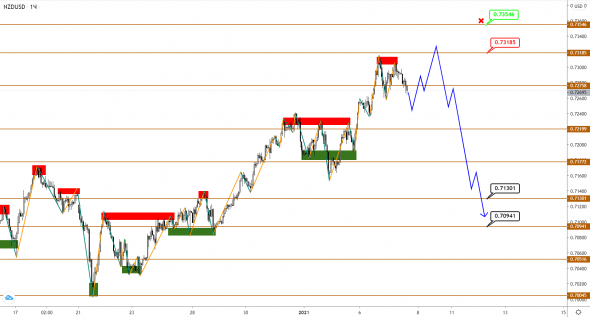 In this pair, such confirmation will also be the ability of the pair to gain a foothold in the current area with the formation of a more solid base for continuation. Such confirmation can be a retest of resistance at 0.7318 with a subsequent rebound from it. This, in turn, will aim sellers in the area between 0.7113 and 0.7094.

Cancellation of the current scenario will take place if the price moves above the reversal level located at 0.7354.