Home Trading shcool The S & P500 is trampling the way up, but gold has changed its mind to grow

Gold failed to reach the expected target area, stopping halfway, and subsequently returning to the price range in which the price was previously. The incipient growth was stopped at the level of 1752, which apparently offered serious resistance, repelling the attack of buyers, after which the quotes returned to the corridor between 1725-1735, where they continue to trade at the moment.

Such price behavior may mean the exhaustion of the upward potential, even though the signal levels have not yet been broken. Probably, the local growth attempt could have ended there, and the price could rush to the last local minimums with the potential for passage even lower. 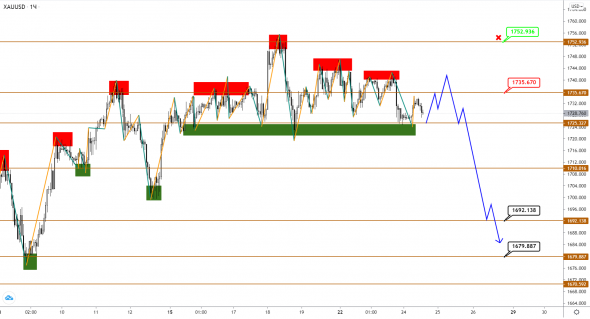 To confirm this scenario, the price needs to confidently gain a foothold in the current area. At the same time, the current level of 1735 can act as the main resistance, the retest of which the price can still go. If the level is held and a rebound takes place, there will be a chance for a breakdown of the level of 1725, which also keeps the price from falling for now, which will already aim it in the area between 1692 and 1679.

Cancellation of the current scenario will take place upon breakout and growth above the pivot level at 1752.

Growth expectations in the S & P500 index did not come true in full, although the price, of course, tried to grow and even renewed its record around 3991, but there was not enough potential to reach the target area. After that, the quotes returned to the previous price area, dropping to the level of 3911, where the main support was expected, which restrains the index from further decline. 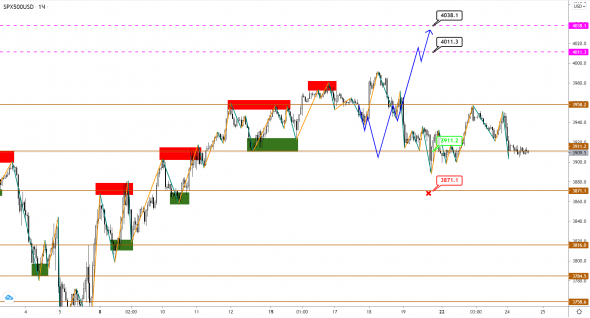 Now we cannot exclude the possibility of a downward correction, however, while the price is trading within the signal levels. There are no serious signals for a reversal yet, so it is logical to continue adhering to the previous scenario for the continuation of the upward trend. 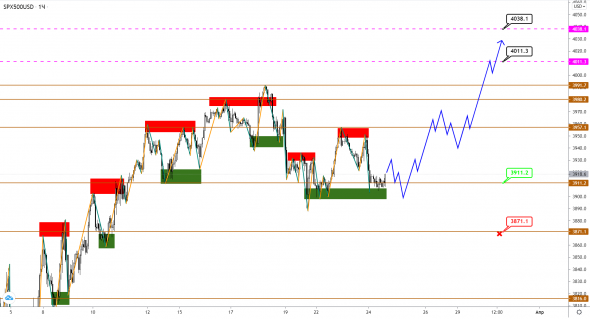 Confirmation of the intention to continue the upward movement will be the confident price consolidation above the support level at 3911, which will be decisive for the further growth prospects. A subsequent rebound from this zone will already aim the index to new highs in the area between 4011 and 4038.