Gold declined as expected in the latest survey. After some consolidation below the resistance level at 1914, the price dropped sharply as part of the impulse, which successfully reached the target area between 1865 and 1848, thus fulfilling the expected scenario.

Immediately after reaching the target zone, the price probably faced serious support at the 1865 level, from where it began to rebound quickly, regaining half of its recent losses. Nevertheless, the likelihood of the continuation of the decline within one more wave after this local correction still remains. 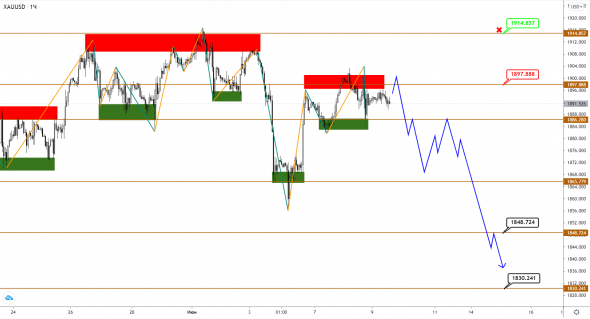 The main decisive moment will be the price consolidation within the current price range below the level of 1897, which is now a resistance. In case of its retest, the subsequent downward rebound will confirm the intentions for a decline and will allow the downward impulse to develop with the target area between 1848 and 1830.

Cancellation of the current scenario will take place in case of passage and consolidation in the area above the reversal level at 1914.

The S & P500 continued its upward movement, as expected in the last review, but still did not reach the target level. Before that, the quotes bounced off the level of 4213 and went down, where they tested the level of the expected support at 4177. The subsequent rebound confidently confirmed the presence of support in this zone, from where the index began to develop an upward movement and is now halfway to the target area. At the same time, the lower limit of the target area at 4245 has not yet been reached, however, its achievement is probably only a matter of time. And after the end of the current flat, the quotes are likely to go to update the record top. 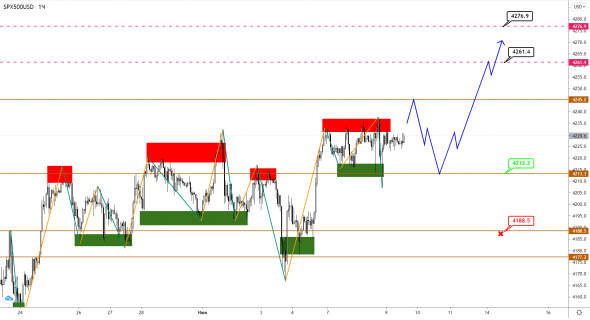 Confirmation of intentions for continued growth will be the confident consolidation of the index in the current price area. At the same time, a local correction with a retest of the expected support at 4213 is possible. In turn, a subsequent retest and a pullback from this zone may signal the resumption of the upward impulse, which will aim to the target area between 4261 and 4276.

Cancellation of the current scenario will take place if the price continues to decline and moves below the reversal level at 4188.