Home Trading shcool the correction turned out to be shallow, is there another jump up ahead?

The Australian dollar appears to have completed a downside phase in a correction that was not as deep as one might expect. The target area was not reached. The pair did not begin to decline in the framework of the assumed scenario, breaking through the resistance at 0.7678, and by now, apparently, is consolidating above the reversal level at 0.7734.

The scenario with a downward correction has obviously exhausted itself. The latest rally in the pair hints at the intention to continue the rally in the new phase of the uptrend, which will be a priority if confirmed. 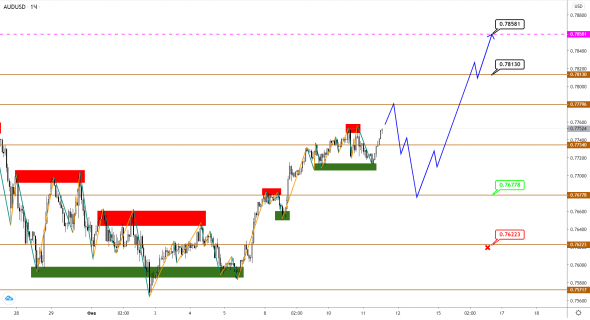 To develop a strong upward impulse, the pair will probably need to consolidate in the current area with the formation of a lead-in formation. This will become possible in the event of a local correction to the area of ​​expected support at 0.7677, consolidation above and the subsequent rebound from which will aim the quotes to the area above the previous highs between 0.7813 and 0.7858.

The scenario will be canceled if the price drops below the reversal level at 0.7622.

The New Zealand dollar is still within the formed range, remaining in uncertainty. The expected exit from the corridor did not take place, the target area was not reached. The pair dropped to its lower border at 0.7130, but then immediately turned upward, going above the resistance at 0.7177, and is currently trading slightly above the reversal level at 0.7219. In this case, the Australian dollar, which gives a signal for growth, can provide a guideline for directions. Probably, in this pair, we should also expect the price to go up after fixing below the upper border of the corridor for its subsequent breakdown. 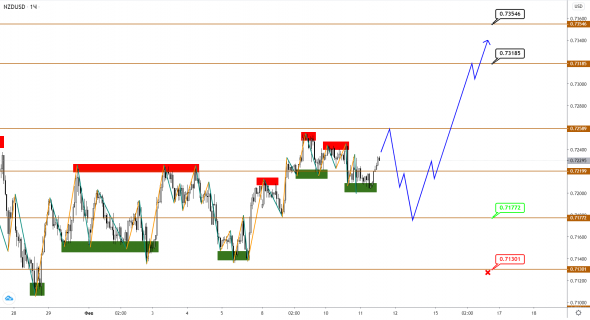 Now the price is testing a strong resistance level at 0.7258, which is the extreme border of the range, and which may not immediately miss the price higher, leading to the development of a local correction with a limit in the support area at 0.7122. Confirmation of intentions to resume growth will be the rebound from this zone with the renewal of the local maximum at 0.7258, which will aim the pair in the area between 0.7318 and 0.7354.

Cancellation of the current scenario will take place in case of decline to the area below the reversal level at 0.7130.