Meanwhile, it became known that Russia is ready to support the planned production growth in OPEC +. Moscow shares the position of the UAE on returning to the original agreements. Kazakhstan also supported the consensus in the OPEC + agreement. For Kazakhstan, the level of liabilities in January 2021 will be 1.417 million bbl / day.

Also, the countries participating in the agreement agreed to hold monthly ministerial meetings, starting in January 2021, to review the current state of the oil market and to adjust the further level of restrictions.

This week, the alignment of the USDKZT rate continued to move towards the lower range amid rising oil prices, which reached $ 49.5 and the growth potential is still preserved. This, in turn, allowed the rate to go below the signal level of 424.25, marking at 420 by today. Thus, we can state the consolidation below the level of 424.25, which now acts as a resistance when trying to grow. 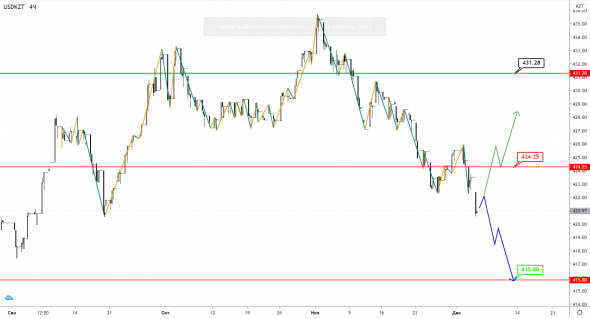 The technical picture signals the pair’s intention to further decline. The breakout of the key level 424.25 took place, and the price confirmed it as a resistance, since a retest and a rebound from the level took place, followed by a continuation of the decline. The pair is currently trading at 420.90. The next target level for the movement is the level of 415.80.

An alternative scenario assumes a breakdown of the resistance at 424.25 and a price return to 431.28.