Home Trading shcool local correction is coming to an end

Since the last review, the euro has not started its decline in the framework of a large correction. The pair rose above the expected resistance at 1.2101 and broke the reversal level at 1.2137. However, having consolidated above this level, the upward movement did not continue. The price rested against the level of 1.2174, which did not let it go higher, and at the moment the quotes seem to bounce off it.

This circumstance does not yet allow completely canceling the previous scenario for a decline, although the signal levels were violated. The absence of a full-fledged upward impulse, rather, indicates incorrectly defined rebound levels that need to be corrected. 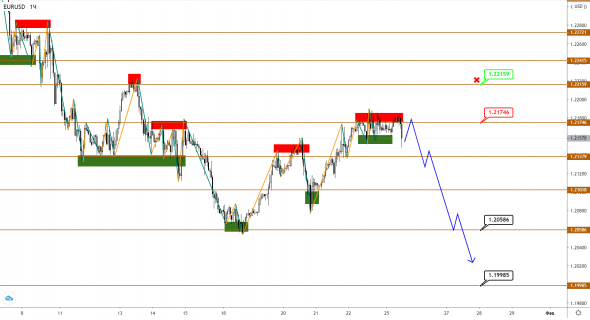 Based on this, the signal levels are determined in accordance with the current position. It is obvious that the level 1.2174, from which the pair has now bounced, which does not exclude its probable retest, which will be another confirmation in case of a rebound. If this scenario is realized, then with the subsequent development of the downward impulse, the target area for the movement will be the area of ​​Medju 1.2058 and up to 1.1998.

Cancellation of the current forecast will take place upon breakdown and consolidation above the reversal level at 1.2215.

The continued decline in the British pound did not take place. The pair broke through the resistance at 1.3553 and then went beyond the pivot level at 1.3617. After that, a retest took place, confirming the fixation over it. Nevertheless, the level of 1.3685, which was previously a resistance, once again acted as a serious resistance, which cannot be ignored. The price, although it went beyond its borders, is currently returning under it again. 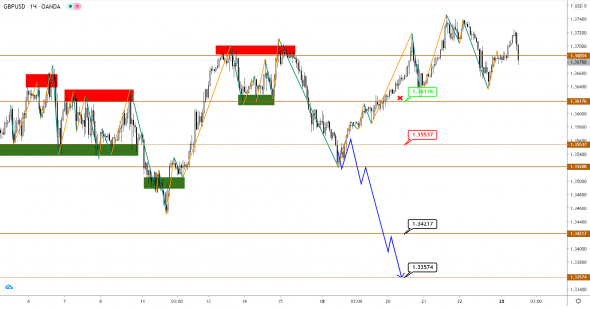 Thus, a violation of the signal levels took place, however, the above circumstances are the basis for their correction and do not yet allow canceling the previous scenario for a decline. 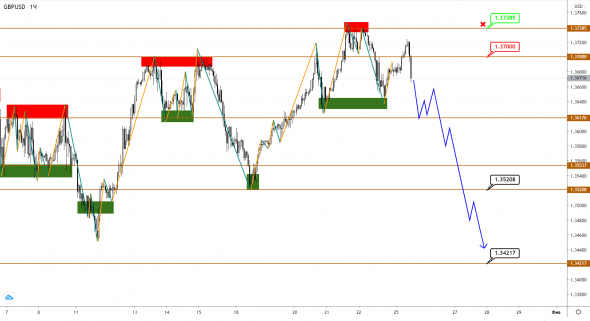 Now the pair has started to moderately decline, having gone below the level of 1.3700, which is the current resistance, confirmation of the continuation of the decline will be the final consolidation below it. In this case, there is a chance for a full-fledged downward momentum to develop with a target area between 1.3520 and up to 1.3421.

The situation in the Japanese yen remains uncertain, which continues to trade in a range and has not started to grow since the last review, contrary to expectations. The price moved below the expected support at 103.71, but failed to reach the pivot level at 103.26. Having rebounded from this area, the quotes are now returning above the signal levels. 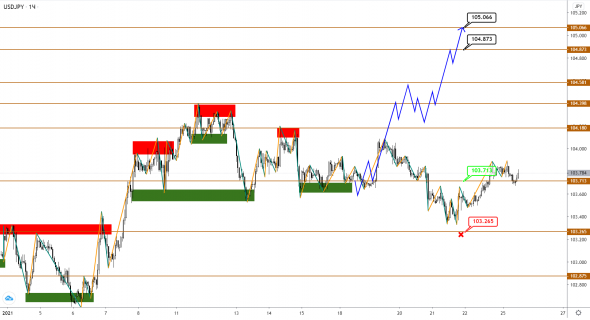 The strength of the signal levels is still preserved, and the previous scenario for an upward movement is still relevant. The trend movement is likely to start when the current range is exited, the upper zone of which is at 104.18. 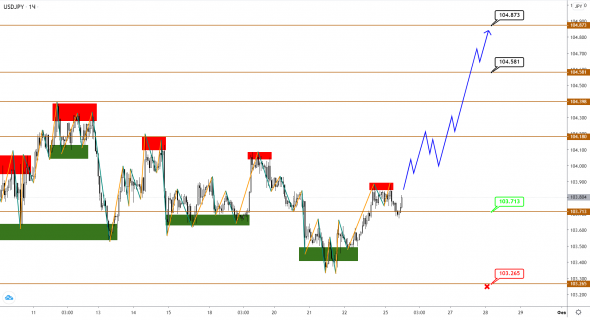 The pair is currently testing the strong support area at 103.71. In this case, the determining factor will be the ability of the price to finally gain a foothold above it. A subsequent rebound from this level will give a chance for the next upward wave to develop with a target area between 104.58 and 104.87.

Cancellation of the current scenario will take place upon breakdown and consolidation of the pair below the pivot level at 103.26.