The Australian dollar continued to decline in line with expectations, but has not yet reached the target area, stopping at the 0.7571 level, after which it began to recover. However, while the script is in the execution phase. The pair presumably rebounded from resistance at 0.7677, which has been tested twice and is currently trading lower.

Thus, the downward correction has entered a phase of active development and the decline still has a potential for decline. Therefore, the previous scenario remains valid, while maintaining the same target area for price movement. 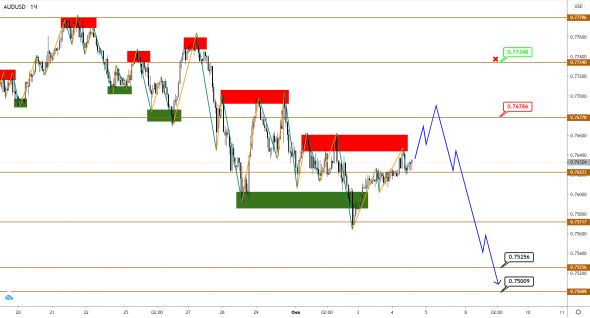 At the moment, the level of 0.7677 remains a fairly strong resistance, and the area of ​​the middle of the flat at 0.7734 is the limit for the movement. This gap acts as a buffer zone, from which a subsequent rebound can be expected, which will give a chance for the formation of a downward impulse with a target in the area between 0.7525 and 0.7500.

The scenario will be canceled if the price moves above the reversal level at 0.7734.

New Zealand dollar remains in uncertainty, target area is not reached. In this pair, there is still a designated range between 0.7130 and 0.7219, which the price still could not leave. The quotes have already tested the reversal level at 0.7219 three times, but they have not yet managed to overcome it. Obviously, there is strong resistance at this level.

Here the correctional phase is still at the stage of its development. Probably, the decline still has the potential to continue. Therefore, the previous scenario remains unchanged. 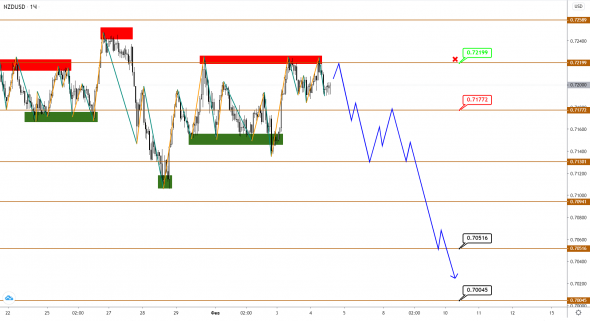 Now the price is testing a strong resistance level at 0.7219, which is the upper border of the range, and which, if it is impossible to overcome it, may lead to the beginning of an impulsive downward movement. A confirmation of intentions for further decline will be a rebound from this zone with an update of the local minimum. The targets for reaching are the same – this is the area from 0.7051 to 0.7004.

Cancellation of the current scenario will take place in case of growth above the reversal level at 0.7219.