Home Trading shcool growth continues, and the end and edge is not visible to him

The Australian dollar has risen since the last review, fully fulfilling the expected scenario for an upward movement. As expected, the pair confidently consolidated at 0.7734, confirming it as a strong support, after which it began to grow as part of an impulse movement followed by reaching the target area between 0.7858 and 0.7884, and then continued to grow further.

The upward movement is still continuing, now the pair is trading at its highs and there are no signals for a reversal. Therefore, it is logical to expect continued growth towards the new target area, so that the scenario with an uptrend remains in effect. 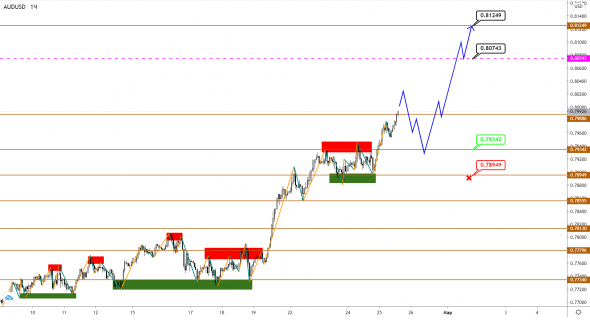 To continue the upward impulse, the pair will probably need to consolidate in the current area with the formation of a lead-in formation. This will become possible in case of a retest of the expected support at 0.7934, consolidation above and a subsequent rebound from which will aim the quotes in the area between 0.8074 and 0.8124.

The scenario will be canceled if the price drops below the reversal level at 0.7894.

The New Zealand dollar finished trading within the formed range and, as expected, continued its upward movement, as it was expected in the previous review. The pair confidently consolidated above the support level at 0.7177, from where the upward impulse began, which subsequently reached the target area between 0.7318 and 0.7354. The movement did not end there, growth continued above this area. 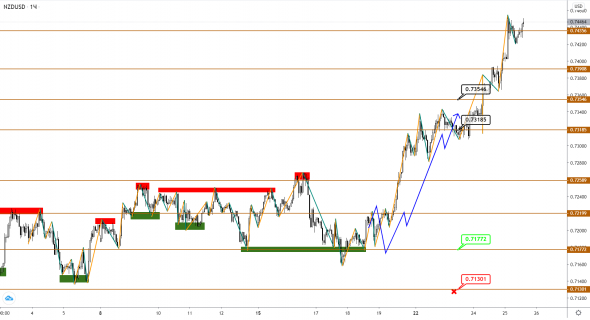 In this case, there are also no signals for the exhaustion of growth, quotes are trading at their highs and the probability of its continuation is still very high. Therefore, the previous scenario for an upward movement is still valid. 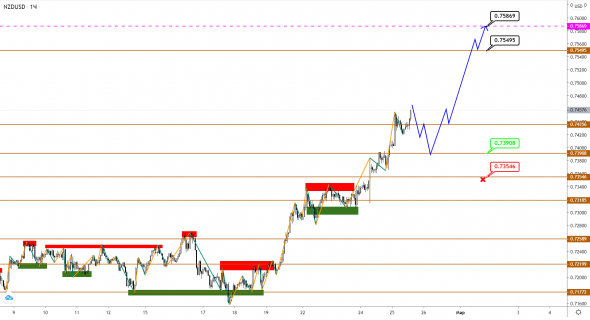 Confirmation of the intention to continue the upward movement will be the ability of the price to gain a foothold in the current area with a probable retest of the support level, expected at 0.7390. In the event of a subsequent rebound from this zone with the formation of a lead-in impulse, the pair may aim to new highs in the area between 0.7549 and 0.7586.

Cancellation of the current scenario will take place in case of decline to the area below the reversal level at 0.7354.