Gold dropped, contrary to expectations for continued growth, essentially fulfilling the previous forecast. Having reached the 1959 level, from which the price bounced off, gold began to fall rapidly, breaking through the support at 1932, and dropping below the reversal level at 1914, with subsequent consolidation. Subsequently, the quotes continued the momentum, being noted around the 1820 mark.

The current circumstances may indicate the potential for the continuation of the movement that has begun. At the moment, the quotes are trying to recover, however, upon completion of this local correction, the price may return to decline again with the renewal of the local minimum. 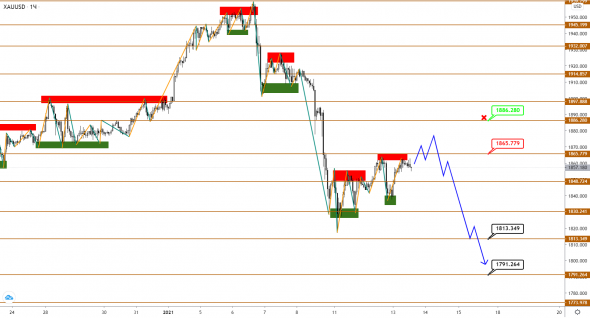 To confirm these intentions, the price needs to gain a foothold in the current area. Probably, this may require a retest of the resistance level at 1865. If the level holds, then the subsequent rebound from it will give sellers a chance to send gold to local lows with a target area between 1813 and 1791.

In turn, the cancellation of the current scenario will take place if the price continues to grow and fixes above the reversal level at 1886.

The S & P500 index, after its last precipitous decline, did not continue this momentum, despite expectations. After some consolidation, the price continued to grow, breaking through the resistance at 3715 and consolidating above the pivot level at 3733, followed by the renewal of the absolute maximum. Thus, the uptrend in the index continues. 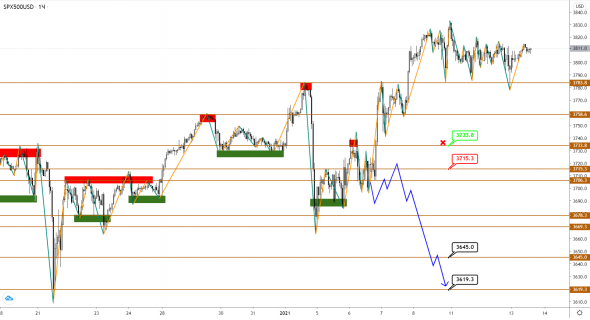 Apparently, the growth has a chance of continuation, and soon the price may rush to new record highs after the end of the current phase of consolidation. 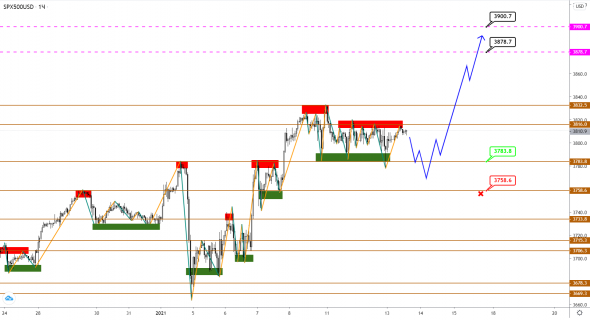 Confirmation of the intention to continue the upward movement will be the ability of quotes to gain a foothold in the current area with a limit at 3783, where support is expected, and with an extreme border at 3758. A subsequent rebound from this area will give a chance to form an upward impulse with the nearest targets in the area from 3878 to 3900.

The current scenario will be canceled in case of a breakout and consolidation below the pivot level at 3758.