Gold continued its decline as expected in the latest review, fulfilling the scenario. The incipient upward local correction found resistance at the level of 1897, which the price tested several times, and after the rebound, it began to develop a downward impulse that successfully reached the upper boundary of the target area at 1848.

At the reached level of 1848, the quotes probably faced support, as they immediately rebounded from it and are now trading slightly higher, consolidating in this area. It is likely that this flat will continue for some time. However, after it ends, there is reason to expect another wave of decline. 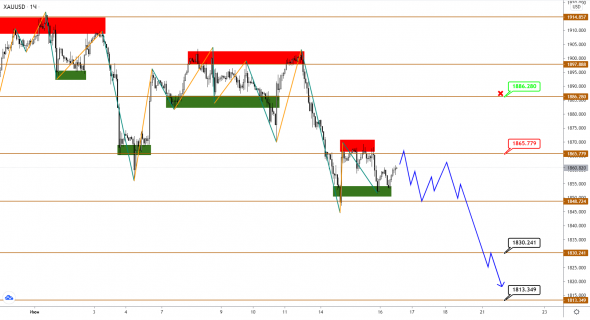 The main decisive moment will be the price consolidation within the current price range below the level of 1865, which is now a resistance. If it retests and consolidates below with the development of a subsequent downward rebound, it will confirm the intentions for a decline and will allow the downward impulse to develop with the target area between 1830 and 1813.

Cancellation of the current scenario will take place in the event of a pass and consolidation in the area above the reversal level at 1886.

The S & P500 continued its upward movement, as expected in the last review. After consolidating in a narrow range and a successful retest of the 4213 level, where the main support was expected, the price confidently implemented a rebound and developed a forward upward movement, within which it worked out the target area near its lower border at 4261. 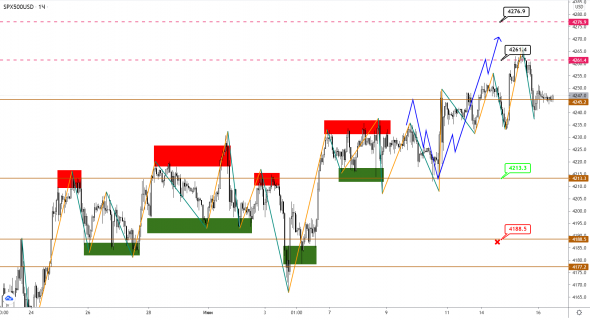 Another record high was marked within the current uptrend. There are practically no strong reversal signals, so it is logical to adhere to the previous scenario counting on the continuation of the growth of quotations to new highs. 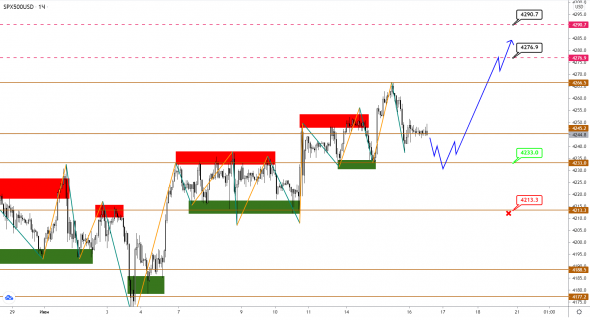 Confirmation of intentions for continued growth will be the confident consolidation of the index in the current price area. At the same time, a local correction with a retest of the expected support at 4233 is possible. In turn, a subsequent retest and a pullback from this zone may signal the resumption of the upward impulse, which will aim to the target area between 4276 and 4290.

Cancellation of the current scenario will take place if the price continues to decline and moves below the reversal level at 4213.