The euro did not begin to decline according to the assumed scenario, having slowed down in the range from 1.1905 to 1.1868, thus forming a sideways trend, within which it is still trading. At the same time, an attempt to develop the upward movement failed – the resistance at 1.1957 held back the momentum, confirming the strength of this zone and sending the pair down again.

The current alignment retains the previous decline forecast, in view of a full retest of the signal zone and the subsequent return under it. The quotes are likely to continue trading in the current range, and upon completion they have a chance for a continuation of the corrective decline to the previous target area. 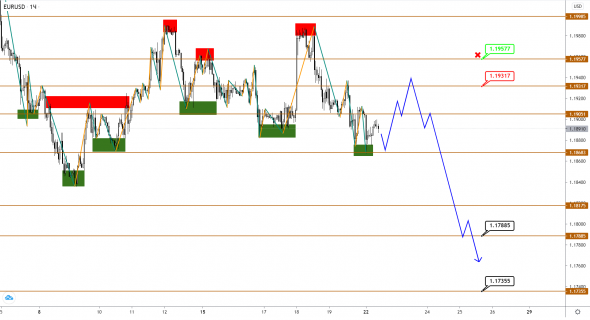 Taking into account the context, the signal zone has been corrected, because before the main impulse of the decline, it is quite possible to expect a rebound from the lower border of the flat at 1.1868, which could lead to a local upward movement in the area between 1.1931 and 1.1957. A pullback from this zone, in turn, will confirm the start of the downside momentum, which will target the area between 1.1788 and 1.1735.

Cancellation of the current scenario will take place in case of breakdown and growth above the pivot level at 1.1957.

The British pound is also continuing the flat, which has been going on for a long time. The target area was never reached. For almost a month, the pair has been trading in a range between 1.4019 and 1.3860. Since the moment of the last review, the price first went to the level of 1.3860, after which it rose again to the resistance at 1.3959, going slightly higher to the level of 1.40, from where it began to decline again. 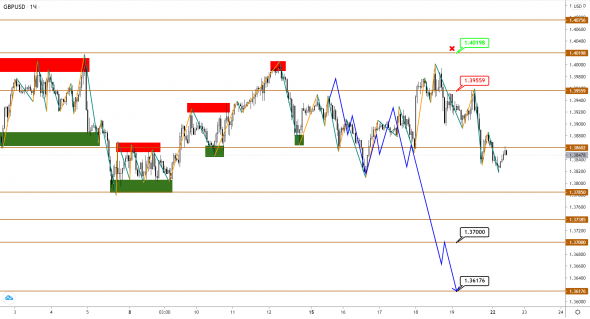 While the general nature of the movement continues in the form of a range, in which the pair is likely to trade for some time. However, the time for its end is obviously approaching. So the chances of a continuation of the decline remain, so the previous scenario is still valid. 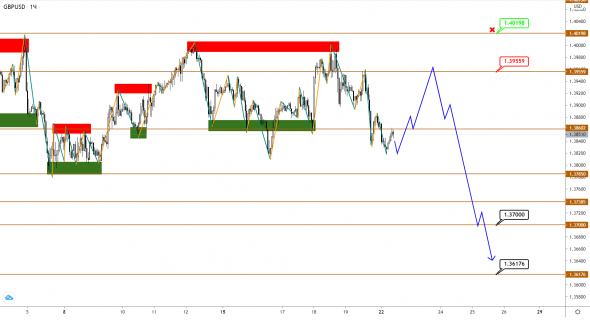 The expected scenario remains the same. At the moment, the pair is likely to retest the signal zone between 1.3955 and 1.4019. In this case, the decisive factor will be the ability of the price to return and gain a foothold below it. In this case, the pair has every chance to develop a downward impulse aimed at the area between 1.3700 and 1.3617.

Cancellation of the current scenario will take place upon growth and consolidation above the reversal level at 1.4019.

Growth paired with the Japanese yen also slowed down. However, neither the expected correction nor the expected growth happened – neither the target area was reached, nor the signal zone was tested. The price just continued to trade between 109.37 and just above the 108.45 level, thus forming a range. 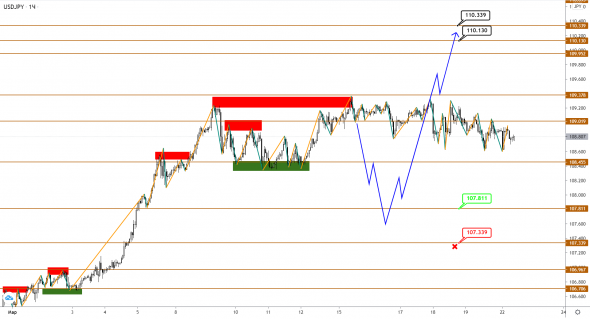 It is obvious that a corrective formation is developing now, so the possibility of a downward movement still cannot be ruled out. Nevertheless, the price can gain a foothold in the current area, from where a new upward impulse will start. Therefore, there are grounds for correcting the signal levels, leaving the previous scenario in force. 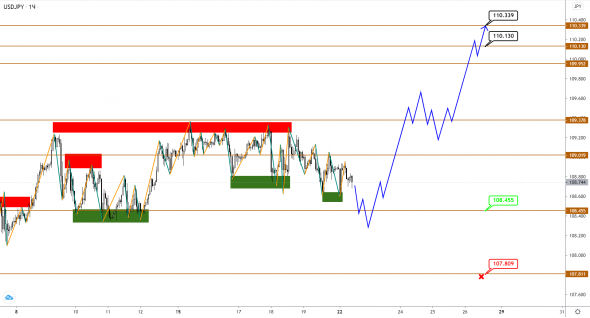 Now, the pair is obviously aiming at the area of ​​the lower border of the current flat at 108.45, which is a serious support. This will be confirmed by a retest of this level with a subsequent rebound from it, which can give strength to buyers for the development of an upward impulse, which will aim at the area between 110.13 and 110.33.

Cancellation of the current scenario will take place upon breakdown and consolidation of the pair below the reversal level at 107.80.