The euro did not reach the expected targets for the downward movement, having gone into a local upward correction halfway. The pair began to decline, however, in the area just below 1.1850, it probably found support, from where it began a moderate upward movement, testing the resistance at 1.1957 and breaking through to the reversal level at 1.1998, which, however, did not break, returning below signal levels, where it is currently being traded.

The current alignment has not yet canceled the previous forecast for a decline, in view of a full retest of the signal zone and the subsequent return under it. The quotes are likely to continue to trade in the current range, and upon completion they have a chance to continue the corrective decline to the previous target area. 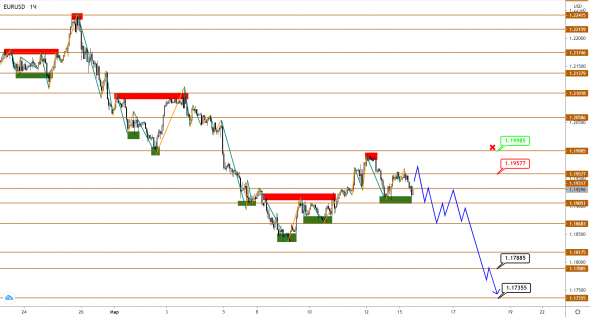 An attempt by the price to overcome the signal zone between 1.1957 and 1.1998 with a repeated retest is not excluded. In this case, the confirmation of intentions for a decline will be a pullback and consolidation below this zone, followed by the formation of a downward momentum, which will aim at the area between 1.1788 and 1.1735.

Cancellation of the current scenario will take place in case of breakdown and growth above the pivot level at 1.1998.

The British pound fulfilled the minimum targets for the local correction, but went a little further than expected. So, I didn’t have time to start moving along the main trend. The expected scenario of the previous review has not yet been fulfilled, the target area has not been achieved. The pair tested the signal zone between 1.3955 and 1.4019, returning lower for the moment. 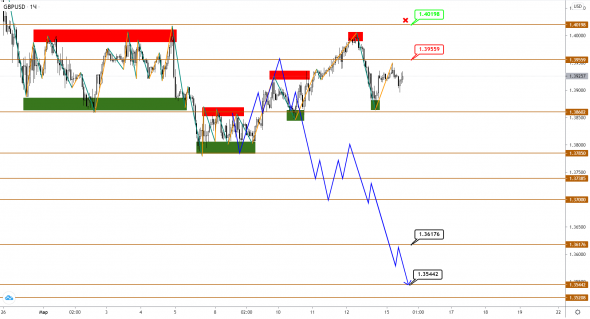 So far, the general nature of the movement looks like a range in which the pair continues to trade, and will probably continue to trade for some time. However, there are still chances for a continuation of the decline, so the previous scenario is still valid. 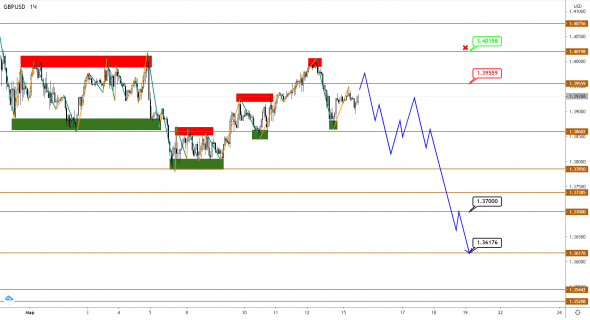 Cancellation of the current scenario will take place upon growth and consolidation above the reversal level at 1.4019.

The growth in pair with the Japanese yen continued, as expected in the previous review. The price simply continued its upward movement without retesting the support level at 107.81 and subsequently fixing itself at the level of 108.45, where, obviously, there is a fairly strong support. The target area has not yet been fully achieved. At the moment, the pair has not reached the lower border of this area for just a couple of points. Nevertheless, the goal can be considered fulfilled. 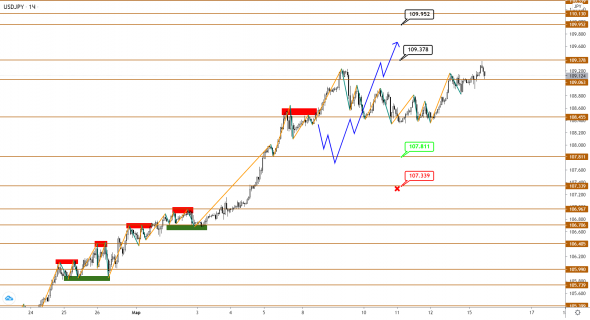 Given the scale of growth, a local downward correction may now begin to develop, after which the movement has every chance to continue to new local highs. Therefore, the previous scenario with growth remains relevant. 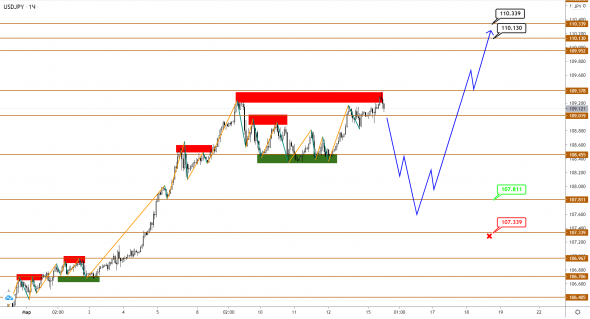 At the moment, the pair is likely to retest the 109.37 level, where a strong resistance was found. This level may not immediately pass the price higher, which could lead to a local correction with a limit around 107.81, where support is expected. In this case, the retest and the subsequent rebound from this zone will contribute to the development of a new upward impulse with a target in the area between 110.13 and 110.33.

Cancellation of the current scenario will take place when the pair is broken and consolidated below the pivot level at 107.33.