Correction on the euro did not take place, contrary to expectations. The price was unable to overcome the level of 1.2174, where, probably, there was a rather serious support. After consolidating above this level, the pair continued to rise, breaking through key levels and ending the year with a high near 1.2309.

Apparently, the upward movement still has the potential to continue. The local correction that took place confirmed the higher minimum, from which the price is now trying to recover, which may result in the formation of a new upward impulse. 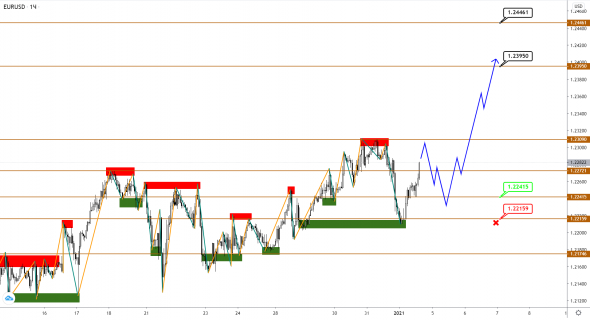 Cancellation of the scenario will take place with a confident breakout and consolidation below the reversal level at 1.2215.

A correction in the British pound also did not take place, despite a rather rapid decline, which suggested at least one more wave of decline. Nevertheless, the pair reversed almost immediately and went beyond the key levels, confidently consolidating above the pivot level at 1.3357. The pair closed the past year at around 1.3700. 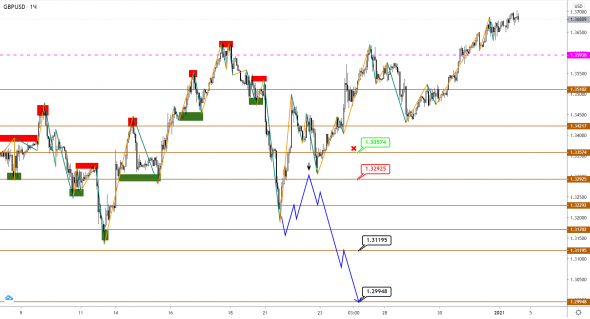 Probably, one can expect at least one more wave of growth to new highs, from which one could already expect the beginning of a large correction. 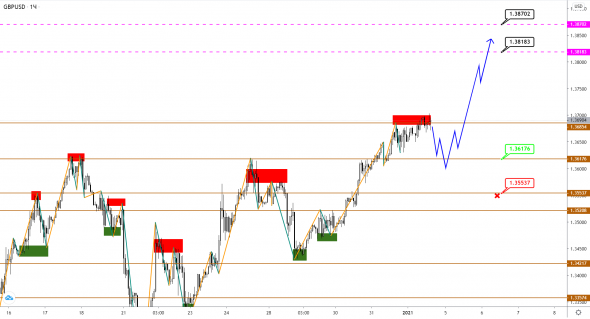 Now the pair is consolidating, forming the level at 1.3685. Apparently, there is resistance here, which does not let the price go higher yet. At the same time, below there are quite serious support levels, which may prevent the development of a large correction. In this case, a local correction is expected within the 1.3617 level, from where the pair will most likely continue to rise to the level of 1.3818 to 1.3870.

Cancellation of the current scenario will take place with a confident breakout and consolidation below the pivot level at 1.3553.

The expected growth against the Japanese yen did not take place either. Since the end of December, there has been a fairly long consolidation between 103.71 and 103.26. The last attempt to break the upper border at 103.71 ended in failure, the price almost immediately returned below and continued to decline, breaking through the reversal level, followed by consolidation below it. 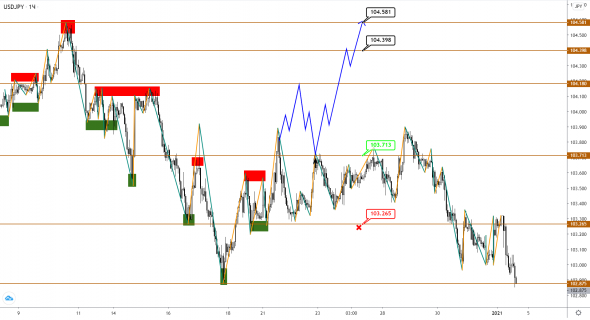 Obviously, the current context makes it clear that the decline still has potential for continuation, which will confirm the pair’s ability to gain a foothold in the current area. 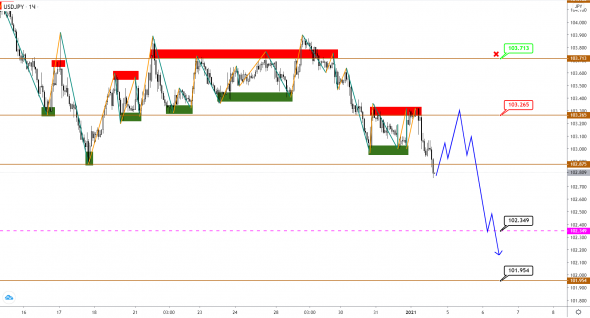 The pair is now testing the level of the previous low at 102.87. A break below the pair would target the area between 102.34 and 101.95. In turn, we cannot exclude the likelihood of a local correction, the limits of which may lie in the resistance area at 103.26, the retest and rebound from which will send the price to the designated target area.

Cancellation of the current scenario will take place upon breakdown and consolidation of the pair above the pivot level at 103.71.