Home Trading shcool Downward correction in EUR, GBP, JPY in the development phase – we are waiting for the continuation

The euro continued to decline, as expected in the previous survey, subsequently reaching the target area. At the same time, the pair first dropped to the level of 1.1998, after which it corrected locally to the resistance at 1.2101, and after the retest began to decline to the target area between 1.1998 and 1.1957. Thus, the script was executed successfully.

Upon reaching the target area, the pair continued its downward movement and has already dropped to the level of 1.1868 at the moment. The development of the corrective movement is in an active stage and still has the potential for continuation. 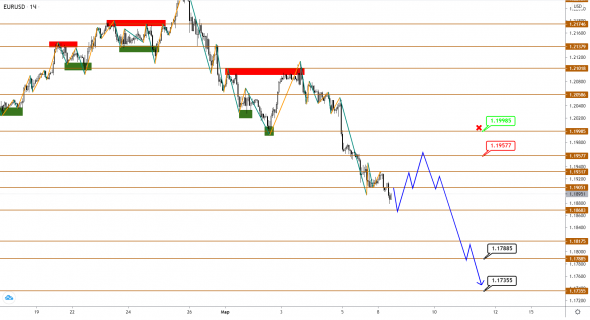 Now the pair has formed a downward pattern, which is probably at its local minimums, which does not exclude the possibility of a local upward correction to the resistance level at 1.1957. In this case, a retest and subsequent pullback from this zone will aim the pair to a new local minimum in the area between 1.1788 and 1.1735.

Cancellation of the current scenario will take place in case of breakdown and growth above the pivot level at 1.1998.

The British pound traded in a sideways range between 1.4019 and 1.3900 with an extreme point at 1.3860, after which it began to decline towards the target area, but only reached its upper border at 1.3785, which was tested, after which it rebounded from him. Nevertheless, working off the goal can be considered quite successful. 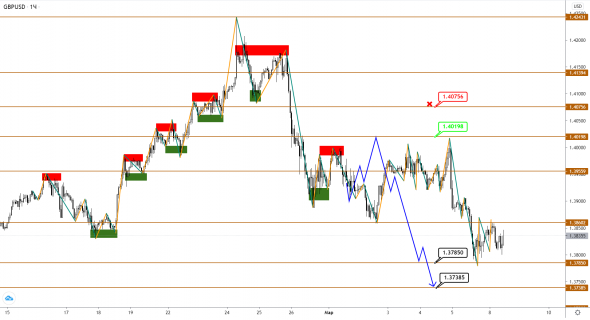 Obviously, the decline comes with deep pullbacks, but the full achievement of the target area is a matter of time. There is still a potential for a downward movement. The pair is likely to target new local lows. Therefore, the previous scenario remains valid. 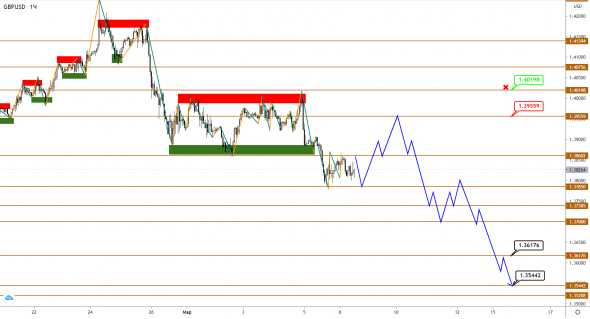 At the moment, the pair is likely to find support at 1.3785, which could lead to a local upward correction to resistance at 1.3955. The retest and the subsequent pullback from this zone will contribute to the formation of another downward impulse, which will aim at the area between 1.3617 and 1.3544.

Cancellation of the current scenario will take place in case of growth and consolidation above the reversal level at 1.4019.

The growth in pair with the Japanese yen continued, as it was expected in the last survey, not only reaching the target area between 107.34 and 107.50, but also significantly exceeding it. At the same time, the pair pre-confidently consolidated above the support at 106.40, after which it continued to grow. At the moment, the pair is already trading in the area of ​​108.45. 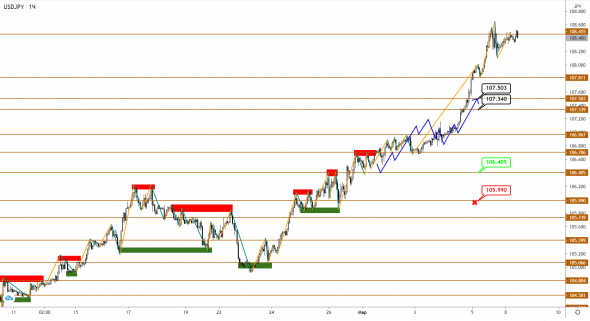 Considering the scale of growth, a local downward correction is not excluded now, after which the movement has every chance to continue to new local highs. Therefore, the previous scenario with growth remains relevant. 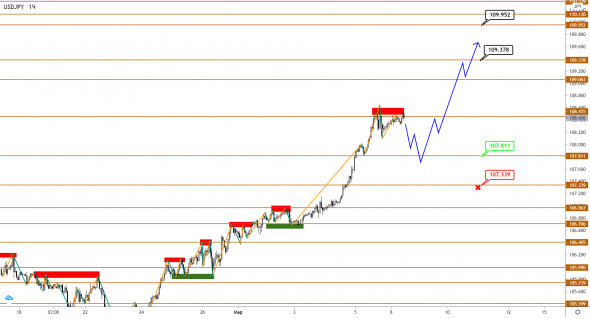 At the moment, the pair is most likely testing the level at which resistance was found. The 108.45 level may not immediately pass the price higher, which could lead to a slight correction with the limit at 107.81, where support is expected. In this case, the retest and the subsequent rebound from this zone will contribute to the development of a new upward impulse with a target in the area between 109.37 and 109.95.

Cancellation of the current scenario will take place upon breakdown and consolidation of the pair below the pivot level at 107.33.