Home Trading shcool decline has lost its potential, is there a reversal ahead?

The Australian dollar was unable to finally realize the expected scenario. Despite the fact that the expected decline took place, the impulse could not reach the target area at 0.7622, ​​stopping halfway from where the reversal took place and the subsequent recovery of previous losses, which brought the pair back to the resistance, where it is currently trading.

Thus, in general, the dynamics of the pair remained sideways without the development of a confident trend. However, the last decline with the renewal of the previous local minimum and a return to the original positions may be a signal for the end of the downward correction. Now quotes are consolidating in the local corridor around the level of 0.7734. This local correction is likely to continue with a decline to the 0.7705 level, where the main support is expected. Confirmation of intentions for further growth will be the subsequent rebound from this zone with the development of an impulse movement, which will aim at the area between 0.7813 and 0.7855.

The scenario will be canceled if the decline continues and consolidates below the reversal level at 0.7677.

But the New Zealand dollar realized the expected scenario and reached the target area in the part of its upper border, which was located at the level of 0.7130. After a short retest of the 0.7219 level, where resistance was expected, the pair rushed down after a successful rebound. 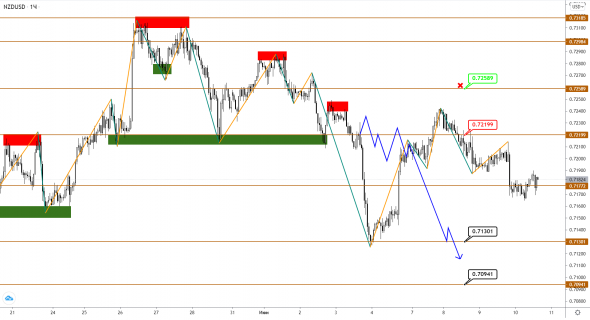 Immediately upon reaching the level of 0.7130, the quotes immediately bounced off it and began to rapidly recover. Obviously, this level worked as a serious support, and the nature of the subsequent growth hints at the likelihood of the decline ending and the beginning of an upward movement along the main trend. 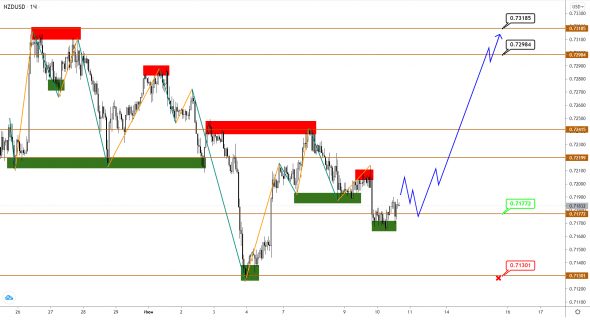 To confirm the growth scenario, the pair will have to confidently gain a foothold at the current levels with a limit at 0.7177, which can work as a support, above which it will need to confidently gain a foothold. The retest and the subsequent rebound from this level will give a chance for the formation of an upward impulse, which will aim at the area between 0.7298 and 0.7318.

Cancellation of the current scenario will take place in case of further decline and consolidation below the reversal level at 0.7130.