The euro began to decline, but before that it rose slightly, updating its local maximum, being noted at the level of 1.2241, which is higher than the anticipated resistance at 1.2137. After its breakout, the price also went above the reversal level at 1.2174. And only this, the pair began to decline, returning under the key levels that had been violated before. The target area has not yet been reached, so it remains at gunpoint.

Obviously, the scale of the correction was determined incorrectly, since they were violated. Nevertheless, the subsequent rapid return under them leaves the previous scenario with the beginning of the correctional decline in force. Probably, this impulse is developing at the moment. 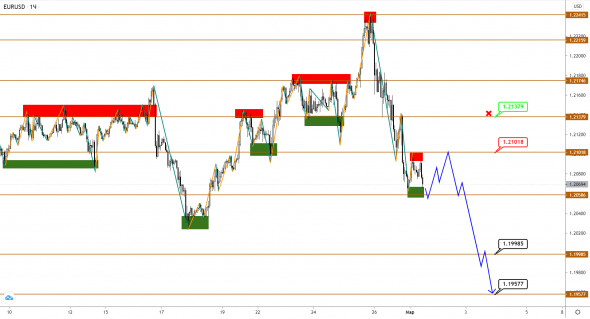 Now the pair has already formed a downward pattern, which can be regarded as impulsive. Confirmation of this fact will be the ability of the price to gain a foothold in the current area with a possible retest of the resistance level at 1.2101. The subsequent rebound from this zone may contribute to the formation of a downward impulse in the area between 1.1998 and 1.1957.

Cancellation of the current scenario will take place in case of breakdown and growth above the pivot level at 1.2137.

The British pound continued to rise after the last review, contrary to expectations of an early reversal. The pair did not hold under the resistance at 1.4019, and after breaking through and breaking above the reversal level at 1.4075, it sharply went up to 1.4243, and only after that it began to decline, returning under the key levels. However, to date, the target area has not yet been worked out. 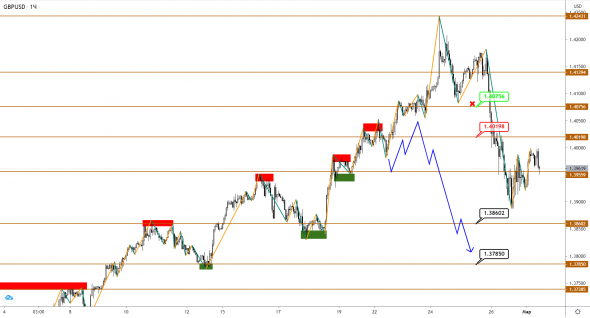 The nature of the decline indicates the beginning of the first wave of corrective decline, which has begun to receive confirmation. So, we can probably expect a continuation of the begun movement within the framework of another impulse. Therefore, the previous scenario for a decline remains in effect. 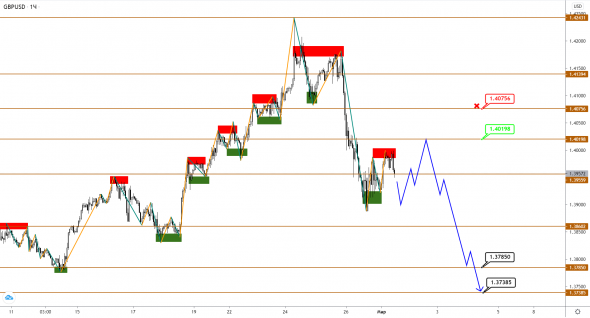 The confirmation of the current scenario may be the price fixing in the current area with the support retest at 1.4019. In case of a subsequent confident rebound from it, sellers will start a new wave of downward movement, with the nearest target in the area between 1.3785 and 1.3738.

Cancellation of the current scenario will take place upon growth and consolidation above the reversal level at 1.4075.

Growth in a pair with the Japanese yen continued, and by today has almost reached the lower border of the target area, which can be considered worked out. Nevertheless, the scenario cannot be considered fully successfully implemented, since the pair, having started a local correction, went a little further than it was expected. The price broke the key levels, reaching the level of 105.06, and only after that it returned to growth. 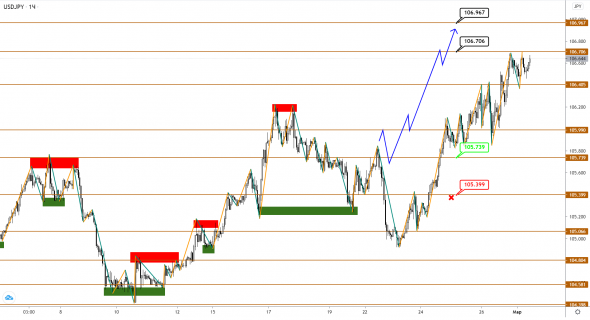 Obviously, the correction depth was determined incorrectly. Although, in general, the forecast can be considered fulfilled, since subsequently the growth did take place. With this in mind, the guidance for an upward movement to new highs is still valid. 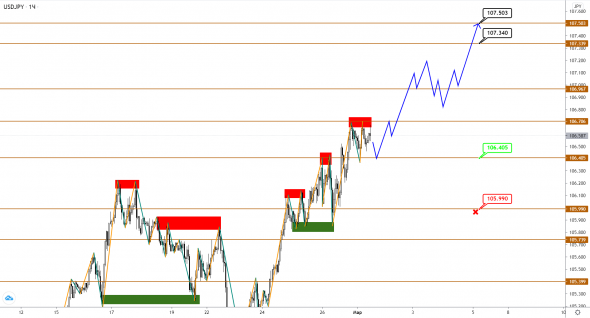 The pair is currently trading near the 106.70 level, which may provide resistance, preventing it from moving higher, as the price is consolidating below it. This could lead to a local correction, the limits of which can lie between the levels of 106.40 and 105.99, where the main support zone is expected. In the event of a retest and a rebound from this zone, there is a chance for a new upward impulse to develop, which will target new local highs in the area from 107.34 to 107.50.

Cancellation of the current scenario will take place upon breakdown and consolidation of the pair below the pivot level at 105.99.