The Australian dollar has declined, contrary to expectations, but confirming the fears of the previous survey about the likelihood of the continuation of the main downward movement. Thus, the growth scenario was not worked out, the target area was not reached. The pair first broke through the support at 0.7734, which it could not hold above, and then broke through the reversal level, canceling this forecast.

Thus, the correctional decline continues. Breakout of signal levels changes the priority from ascending to descending. Now the price has reached a local bottom around 0.7580, from which a local upward correction may take place, after which the decline is likely to continue. 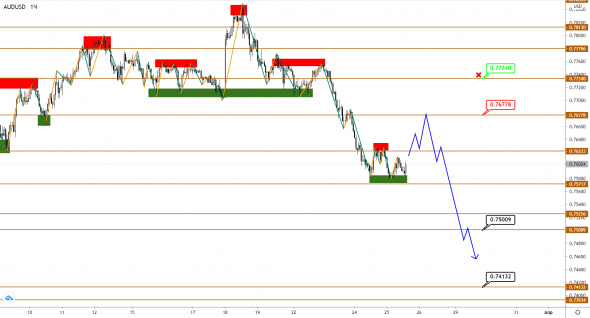 Now the confirmation of intentions to resume the downward movement may be consolidation in the current zone with a possible retest of the level of 0.7677, where the main resistance is expected. In the event of a subsequent rebound from it, the development of an impulse movement should be expected in the future, which will aim at the area between 0.7500 and 0.7413.

Cancellation of the scenario will take place in case of further growth and consolidation above the reversal level at 0.7734.

The supposed fixation above the support in the New Zealand dollar also did not happen. The pair rapidly dropped below it, firmly consolidating below it, and then, practically without stopping, overcame the reversal level at 0.7130, completely canceling the previous growth scenario. Thus, the script was not executed, the target area was not reached. 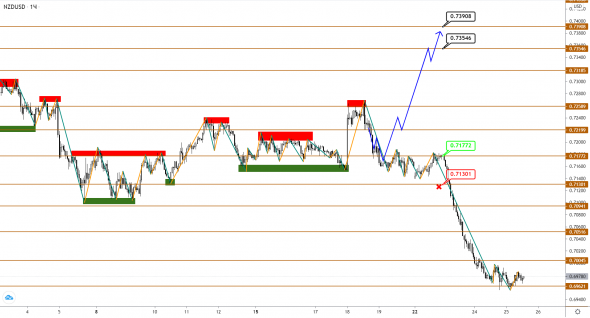 At the moment, the pair has reached a local minimum around the level of 0.6962, which, obviously, acts as a serious support, preventing the price from going lower. Nevertheless, while there is reason to believe that this correctional movement will continue in the near future. 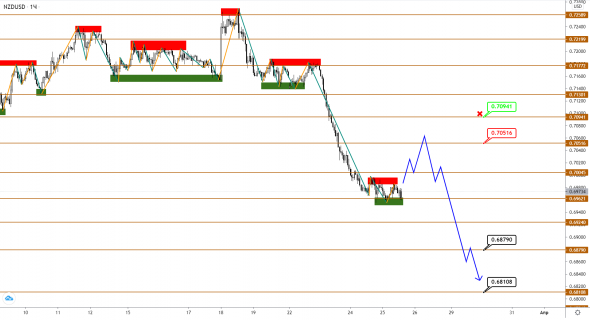 Confirmation of the intention to continue the downward movement will be the ability of the price to gain a foothold in the current area with a probable retest of the resistance level expected at 0.7051. In the event of a subsequent rebound from this zone with the formation of a lead-in impulse, the pair may aim at the area between 0.6879 and 0.6810.

Cancellation of the current scenario will take place in case of continued growth and consolidation above the reversal level at 0.7094.