Home Trading shcool Correction on the S & P500 seems to have passed, now we are rushing to new highs?

Gold confirmed its intentions for a downward correction. The price really began to decline, but the implementation let us down, since it could not reach the target levels. The immediate target was in the 1813 area, and the minimum quotation was in the 1820 area, after which the price reversed and is now in a state of growth. Such a scenario cannot be considered fully executed.

In addition, given the current growth, it is very likely that the correctional decline has ended there and one can quite expect another upward impulse to new local maximums. 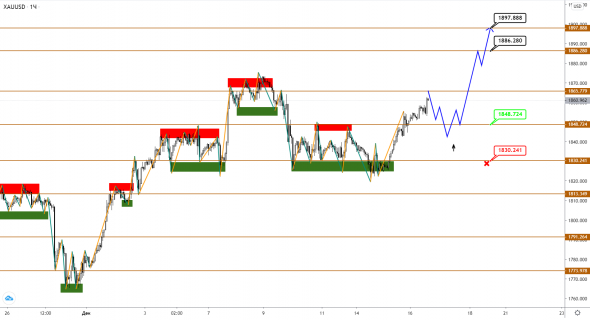 To confirm the intentions of the price for growth, a confident consolidation in the current area can become. As part of the correction, if it develops, the maximum signal level is 1848, from where it will be necessary to wait for a rebound with a subsequent rise above the previous local peak. The target of the movement in this case is the area between 1886 and 1897.

In turn, the decline and consolidation below the pivot area at 1830 cancels the current scenario.

The S & P500 index corrected downwards in line with expectations. As expected, the price formed a base at 3715, indicating resistance in the area. The quotes dropped to the target area between 3645 and 3619, where they met support, after some fluctuations above which they are now heading up again. 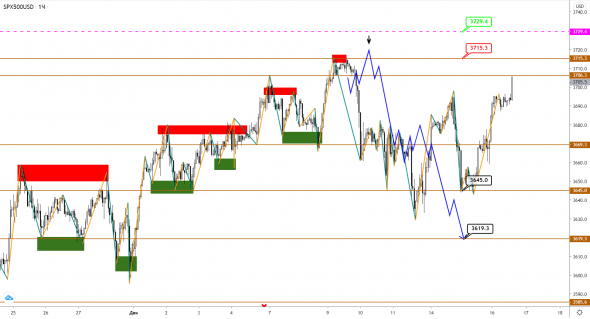 Now the quotes are close to the last maximum, which is likely to offer resistance again and will not immediately let the price go higher. However, if there is enough buying power, then there is a high probability of seeing a pass higher with the renewal of the record top. 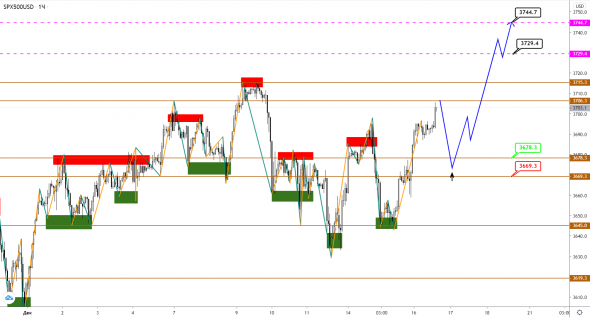 Now the key areas for further growth are the resistance area at 3706 and 3715, if triggered, the price may locally adjust to the limit zone at 3678, where support is expected. The subsequent rebound from here will already return the index to the growth trajectory and aim at the area between 3729 and 3744.

Cancellation of the current scenario will take place in case of a breakout and consolidation below the pivot level at 3669.