The euro declined as predicted in the previous review, bouncing off the resistance level at 1.2174. And after the retest of this level, it rushed to the target area, but only managed to reach its upper border at 1.2058, from which the price began to recover again. In general, the scenario can be considered worked out, but due to its weakness, the assessment can be left neutral.

Now the general picture indicates the lateral nature of the pair’s movement. It can be assumed that the decline will continue after the end of this flat. Therefore, the old scenario remains valid with the update of the target area. 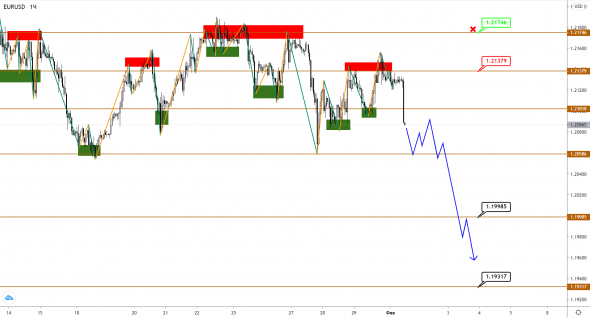 There is now a downward momentum, the limit of which may be at 1.2058, which has been repeatedly triggered as a support, from which the price bounced each time. It must be assumed that this time the pair can bounce off it, trying to recover up to the resistance at 1.2137. A subsequent pullback from this zone will target the pair between 1.1998 and 1.1931.

Cancellation of the current forecast will take place in case of breakdown and consolidation above the reversal level at 1.2174.

The continued decline in the British pound did not take place. The pair broke through the resistance at 1.3700 and then came close to the reversal level at 1.3738, but could not overcome it. Obviously, the price met serious resistance at this level. In general, while the pair is showing a sideways movement with a moderate upward bias and gradual volatility squeezing, which may indicate an impending sharp reversal. 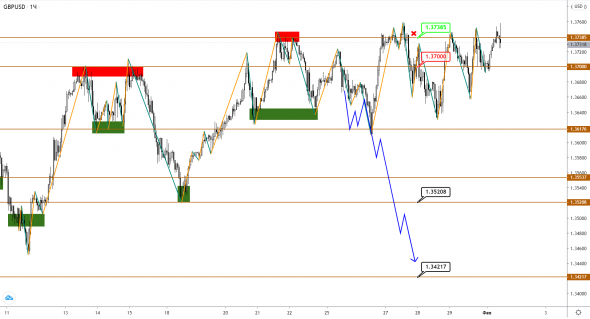 Thus, a violation of the signal levels took place, however, the above-described circumstances do not yet allow canceling the previous scenario for a decline, therefore, until the final overcoming the level of 1.3738, the scenario for a downward reversal remains relevant.

Forecast: the beginning of the downward correction 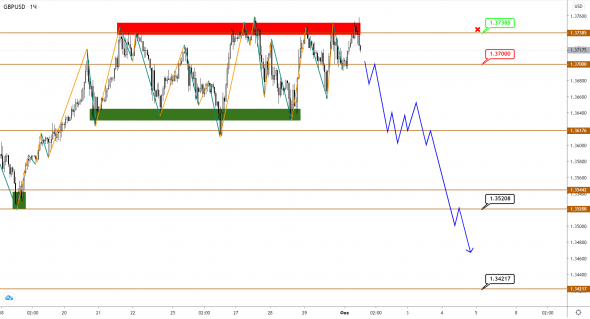 Now the pair has once again bounced off the reversal level of 1.3738, which also gives a chance for a return under the resistance at 1.3700 if a stable momentum develops. The final consolidation below it, followed by a rebound in the event of a retest, still leaves the area between the levels of 1.3520 and 1.3421 as a target area.

The situation with the Japanese yen finally cleared up. Quotes expectedly rose after a confident consolidation above the support level at 103.71, which was tightly tested and there was even an attempt to overcome it, but later, the price returned higher, which contributed to the development of an upward momentum with the achievement of the target area. 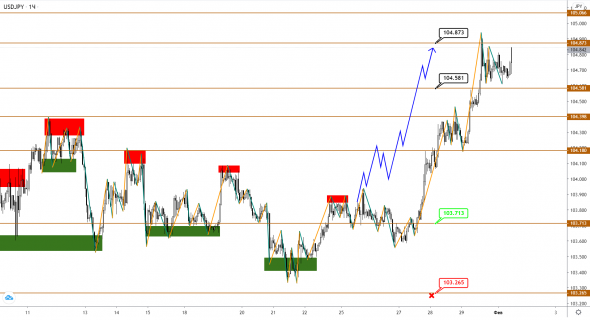 Thus, a strong confirmation of the indicated scenario was obtained. Therefore, there is every reason to believe that this movement has the potential to continue to a new target area. 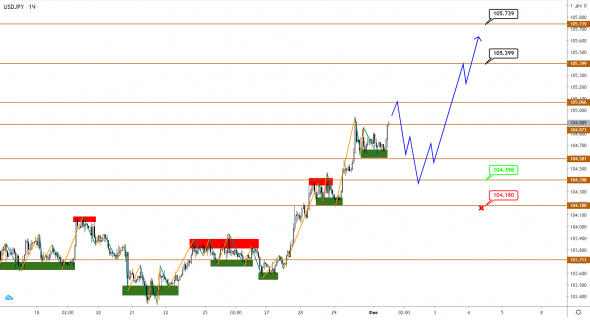 Now the pair has approached the level that is providing resistance, preventing it from moving higher. This could lead to a local correction, the limits of which may lie at 104.39, where support is expected. In the event of a retest and a rebound from this level, there is a chance for a new upward impulse to develop, which will target new local highs in the area from 105.39 to 105.73.

Cancellation of the current scenario will take place upon breakdown and consolidation of the pair below the pivot level at 104.18.