The Canadian dollar continued its decline. The pair rose as expected in the previous review, having worked out the target area between 1.2831 and 1.2883. At the same time, before this growth, the price first tested the support zone, trying to go lower, but failed to gain a foothold. Quotes returned higher, continuing the upward movement. However, the upward movement above the target area could not continue.

Obviously, serious resistance was found in the target area as the pair began to fluctuate below these levels and the price is now moderately declining. This is probably a sign of the exhaustion of the ascending phase, after which you can expect the quotes to reverse down. 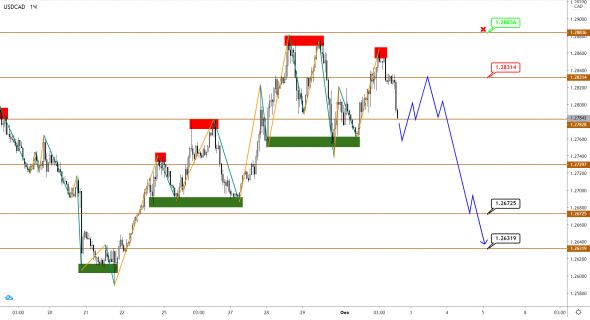 Now the pair needs to gain a foothold in the current area to confirm their intentions. This will probably require testing the current resistance level, which is supposed to be at 1.2831. If successful, we should expect a rebound from this zone, followed by a decline to the target area between 1.2672 and 1.2631.

Cancellation of this scenario will take place with continued growth and consolidation above the reversal level at 1.2883.

Brent oil behaved quite unexpectedly, continuing to grow after a rather long consolidation that began after reaching its local maximum. The price fluctuated in a narrow range between 54.76 and 56.07. And now, instead of the expected downward correction, the quotes once again rose to a new local maximum, breaking through the resistance and reversal level. 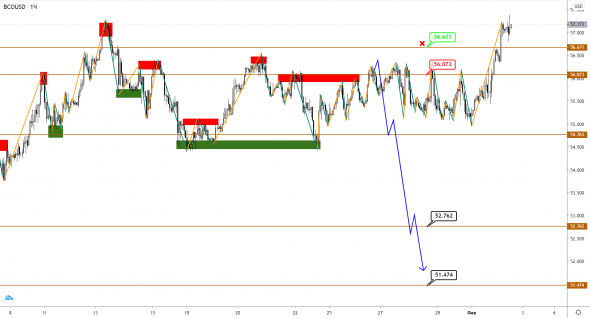 It might well be expected that the corrective reversal will take place later. However, the current picture so far indicates the intention of oil to continue its growth. 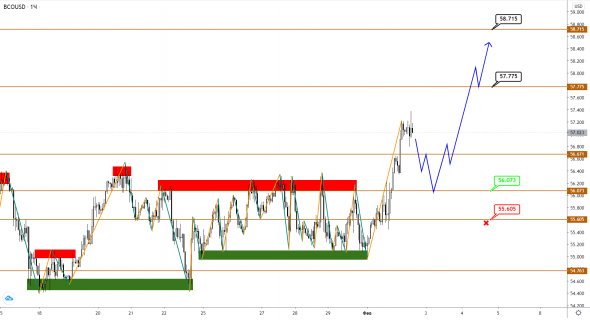 Confirmation of the current forecast will be the ability of prices to gain a foothold in the current area. A return and retest of the area of ​​recent consolidation on the reverse side, which the price has left at the moment, is not excluded. This is the upper border of the flat – the expected support level at 56.07. In case of a successful rebound from this level, there is a chance of forming another upward impulse with a target area between 57.77 and 58.71.

The current scenario will be canceled if the decline continues to the area below the reversal level at 55.60.