The Canadian dollar continued to strengthen, contrary to expectations. The pair continued its decline, breaking not only the support at 1.2631, but also subsequently moved below the pivot level at 1.2584, reaching 1.2453 at the moment. Thus, the assumptions about the upward reversal of quotes were not confirmed, the scenario was not implemented.

Taking into account the renewal of the minimum around the level of 1.2453, we can say that the downtrend is still continuing and there are no serious prerequisites for stopping it. It is quite possible that this trend can be continued with a greater degree of probability to new lows. 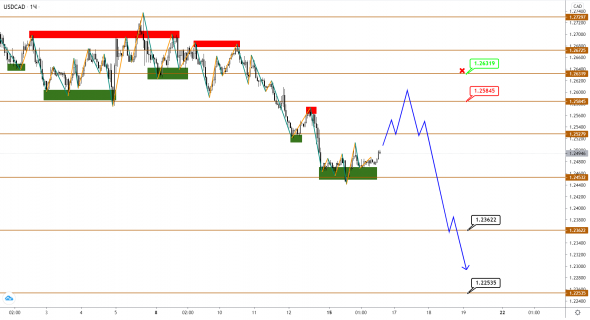 At the moment, the pair has firmly settled above the level of 1.2453, where, apparently, it found serious support, which is holding the price down for now. This may result in a local upward correction with a limit at the level of 1.2584, where resistance is expected. Confirmation of intentions to decline will be a rebound from this zone with the formation of a downward entry formation, which will subsequently target the area between 1.2362 and 1.2253.

Cancellation of the current scenario will take place with continued growth and consolidation above the reversal level at 1.2631.

Brent oil did not continue the decline that had begun, leaving for trading in the corridor. Since the last review, the quotes have not gone anywhere, stuck in the range from 67.56 to 69.93. Thus, the target area was not reached, the scenario was not implemented. It is likely that this flat may continue for some time. 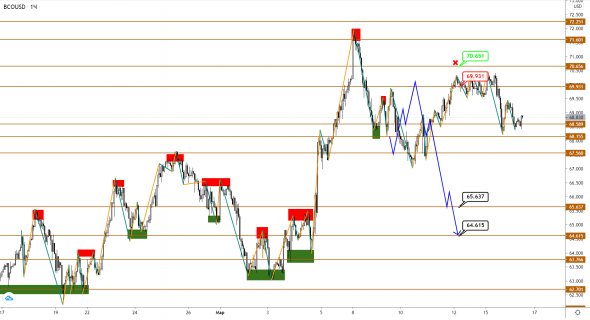 Despite the fact that there was no violation of the signal levels, the price tested the resistance at 69.93 and bounced off it, nevertheless, the probability of growth resumption is very high. A pivot signal here may be the Canadian dollar, which continued to strengthen despite the flat in oil. 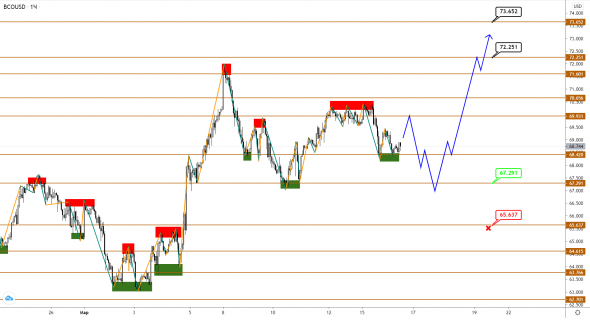 It is quite possible to assume that the current corridor can be continued for some more time. The next step in this case will be a moderate price reduction towards the lower border of this corridor to 67.29, which now acts as a support for the price. Subsequently, a rebound and a return higher could trigger a breakout of the upper boundary at 69.93, reaching the target area between 72.25 and 73.65.

Cancellation of the current scenario will take place if the decline continues to the area below the pivot level at 65.63.