The Canadian dollar continued to decline, as expected in the previous survey. At the same time, at first the price realized a retest and a rebound from the resistance at 1.2631, after which it continued to fall, thereby reaching the target area between 1.2527 and 1.2453, having gone almost to its lower border. She did not manage to stay here, because immediately after that she began to grow sharply.

The nature of the current movement in the pair indicates a clear impulse momentum, which is characterized as a reversal. Therefore, in the near future, a reference point for an upward movement within the framework of a large correctional wave will become a priority. 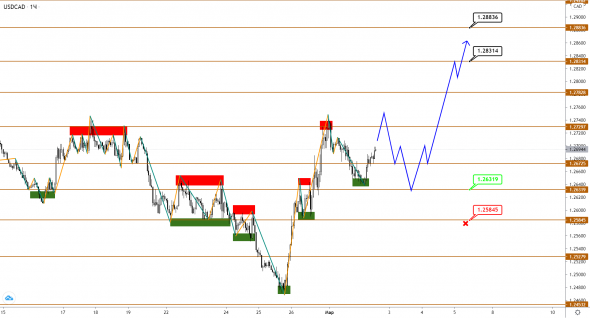 Now the pair needs to gain a foothold in the current area to confirm their intentions. This will probably require testing the current support level, which is supposed to be at 1.2631. If successful, we should expect a rebound from this zone with a subsequent rise to the target area between 1.2831 and 1.2883.

Cancellation of this scenario will take place if the decline continues and consolidates below the reversal level at 1.2584.

Brent crude oil continued the upward trend as expected. Once again, the target area between 67.07 and 68.15 was reached with the establishment of a local maximum within this trend at 67.56. At the same time, before that, the price first tested the support at 64.61, rebounding from which it developed a new upward impulse. 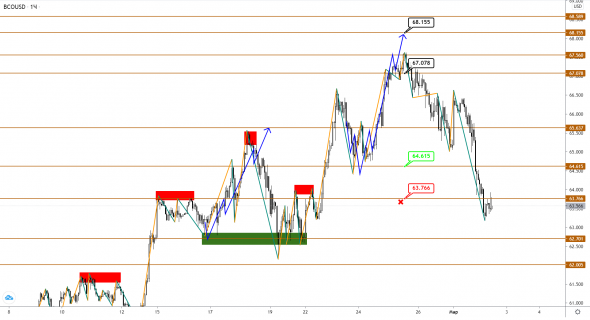 Immediately after working out the target area, quotes began to decline, gradually accelerating the pace and are now trading below the last peaks reached. Obviously, we can state the end of the current phase of the uptrend and the beginning of a correctional decline, which will become a priority in the near future. 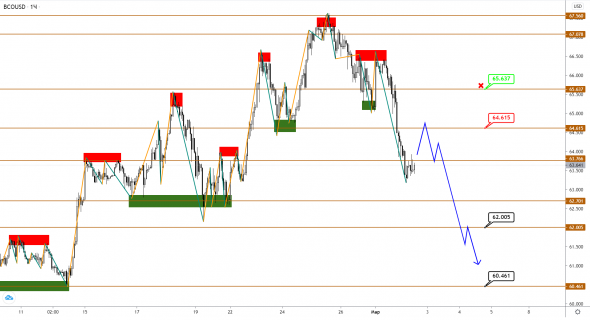 Confirmation of the current forecast will be the ability of prices to gain a foothold in the current area. At the same time, in the event of a local correction, the main barrier is the resistance level at 64.61, which will keep the price from further growth. In case of a retest and a successful rebound from this level, there is a chance of forming another downward impulse with the target area between 62.00 and 60.46.

Cancellation of the current scenario will take place if the growth continues to the area above the pivot level at 65.63.