The Canadian dollar, after a rapid weakening against the USD by the end of last year, could not continue the momentum, contrary to expectations. After retesting the level 1.2926 did not miss the price higher, as it did the first time, playing the role of a strong resistance. This led to a subsequent decline in the pair with a breakdown of not only support at 1.2803, but also a confident consolidation below the reversal level at 1.2782, after which the decline continued, at the moment it was noted at the level of 1.2672.

The bet on the next wave of growth within the framework of the correction did not work, and the subsequent consolidation below the key levels gives a signal that the downward movement still has the potential to continue. Confirmation of this scenario may be the consolidation of the pair in the current area with a possible retest of the level 1.2782, which may work as a resistance. The subsequent rebound from this level will start the beginning of the downward movement with the nearest targets in the area between 1.2616 and 1.2578.

Cancellation of this scenario will take place with continued growth and consolidation above the reversal level at 1.2831.

The supposed downward correction has not developed fully. There was no rebound from the resistance at 50.34. The price moved higher, after which it traded below the reversal level at 51.47 for quite a long time. Obviously, there was strong resistance at this level. However, subsequently, the price was still able to break through this barrier, and for some time went higher at the moment, reaching the level of 53. After that, it returned to the previously formed range. 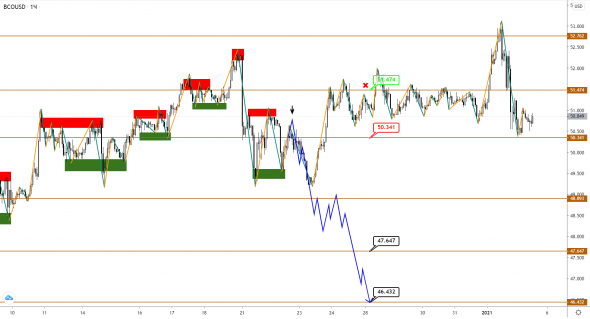 The current picture does not allow us to unambiguously expect either growth or decline, since the quotes do not yet give unambiguous signals. Nevertheless, taking into account the entire context, it can be assumed that growth in another wave is quite possible. Confirmation of this scenario will be a confident consolidation in the current area with a limit in the area of ​​the support level at 50.34. In the event of a test and a rebound from it, an upward impulse may be formed with targets in the region from 53.70 to 54.76. At the same time, the ability of the price to overcome the upper border of the range at 51.47 will also be decisive, the exit above which will give the first confident signal.

The current scenario will be canceled if the decline continues to the area below the pivot level at 49.54.