Home Trading shcool Brent and USDCAD are trading in a range

The Canadian dollar is obviously trading in a wide range and at the moment has turned to weakening, as suggested in the previous review. At the same time, the pair first declined, breaking through the support at 1.2672 and reaching the reversal level at 1.2631 and even slightly lower, but failed to gain a foothold below the level, turning to growth, trading at the upper border of the range.

The target area has not yet been reached, but the potential for achievement remains. After the end of the local correction, there are still chances for the growth to resume. Therefore, the previous scenario remains relevant. 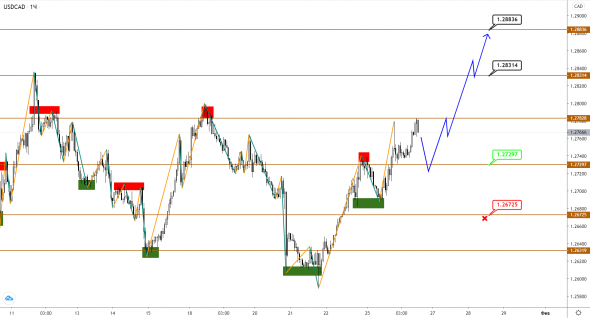 At the moment, the price has come to a serious resistance at 1.2782, from which it has rebounded several times. At the same time, a breakdown of this border is now possible, but before that a local correction to the signal support level at 1.2629 is not excluded. In this case, the subsequent rebound from this area may contribute to the formation of an upward momentum, which will aim at the area of ​​local highs from 1.2831 to 1.2883.

Cancellation of this scenario will take place if the decline continues and consolidates below the pivot level at 1.2672.

Brent crude oil failed to develop the downward movement and continues to trade within the range between 56.07 and 54.76, while confidently fixing below the strong resistance at 56.07, which confirms its strength. The target levels have not been reached, but the current scenario has not yet been canceled either. 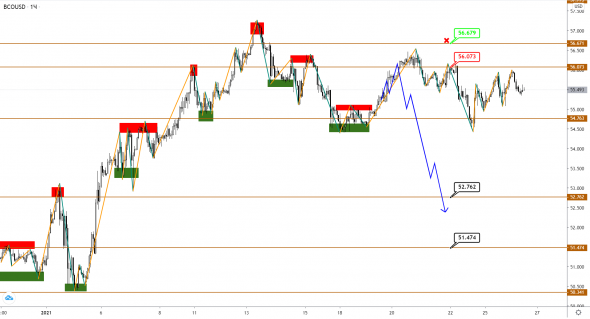 Apparently, the beginning of a corrective reversal is just taking shape. Nevertheless, the first signals for a probable downward movement have already begun to arrive, so the previous scenario remains relevant. 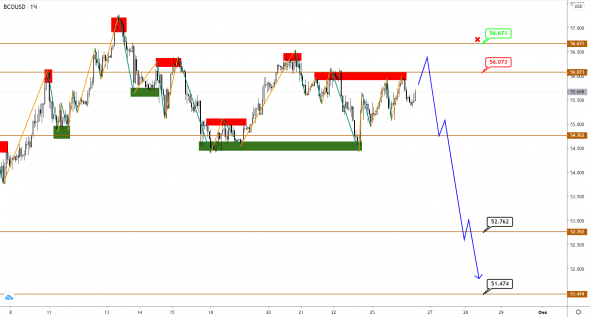 Confirmation of the current forecast will be the ability of prices to gain a foothold in the current area. This will probably require a pass to the resistance level at 56.07 for a retest. In case of a rebound from this area, another downward impulse may be formed, which will aim at the area from 52.76 to 51.47.

Cancellation of the current scenario will take place if the growth continues to the area above the reversal level at 56.67.