Home Signals Are US bond yields a new challenge for the markets?

The slide above compares the spread between the US 10 Years Treasury Note and the 3-Month Treasury Bill with the US S&P 500 over the previous 20 years!

It is not difficult to identify from the graph the relationship of US government bonds with the stock market. It was the previous two serious financial crises (dotcoms in 2000-2002 and the mortgage crisis in 2007-2008) that were accompanied by an increase in the spread between US Treasury bonds (10-year – 3-month) from negative to 3.5%.

A growing spread implies a noticeable decrease in the market value of the US 10 Years Treasury Note (as a result of which the yield to maturity increases) compared to the 3-Month Treasury Bill (there are fewer reasons to sell 3-month bonds, due to the sooner maturity).

I recorded my thoughts on this in a video on Trading View, by the way, on this platform our team consistently leads the TOP rating!

One of the main events of the outgoing week was the overcoming of the 10-year profitability value above 1%, for the first time since March 2020! Only the main holder can have such an impact on the government bond market – US Federal Reserve!
The media explain the victory of the Democrats in the elections in Georgia as a formal reason, opening the Joe Biden’s administration the way to full control over the executive and legislative branches of the country.

But the reason for the decline in 10-Y Treasury I think is different:

Redemption of previously issued US bonds, in the first quarter by almost $ 4 trillion, in the second – by $ 2 trillion

The volume of planned placements of new issues for this year (about $ 2 trillion) will only partially refinance the volume of redemptions: 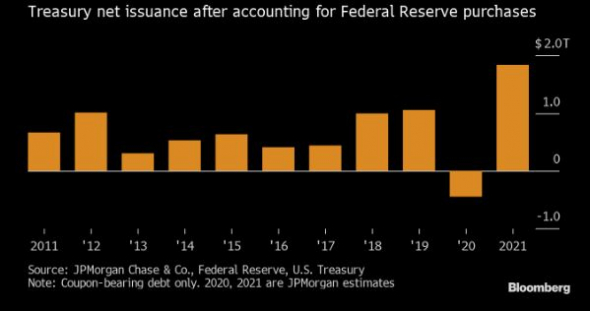 Monthly purchases of Treasuries from the US Federal Reserve under the QE program for $ 80 billion (+ $ 40 billion in mortgage securities) do not compensate for the liquidity outflow.

The following picture turns out:

As the saying goes: “we will see”, but it seems that the 1-2 quarter will be a cold shower for those who, in an “intoxicating” euphoria, furiously sweep away everything that is traded on the stock market. There were too many “extra passengers”, as in the famous story about Morgan and the shoe shiner!

Subscribe to our telegram channel, so that next time you don’t miss interesting thoughts and ideas on the market!

Good luck to all!

Golden rules for a successful trader

Bitcoin – Bearish trend will be!

How to make money on the growth of government bond yields?