Home Forex strategies A brief overview of the PRObonds portfolios. Yields are 13.5-14%, but they will definitely decrease

The current profitability of PRObonds portfolios (for 365 days): 13.6% and 14.1% per annum for portfolios # 1 and # 2, respectively. Soon the current yields will start to decline, as they are now positively influenced by last year’s correction of the bond market, and this is a temporary effect. Since the beginning of this year, both portfolios have brought in just over 1% (the bond market is correcting again), and this makes it difficult to get even the target 12% this year. But so far it only complicates.

Perhaps the bond market, at least, the high-yield market is coming out of the drawdown. If so, the small cash cushion that has been in portfolios since the end of last year has played a positive role. In principle, it softened the decline a little and allowed the inclusion of a new security (bonds of IFC “Seimer”) without selling the existing ones at unfavorable prices. In the coming days and weeks, the reduction of bond positions, planned about a month ago, will gradually be carried out. You also need to return a small amount of money to portfolios for hedging purposes. And create a reserve for inclusion in the portfolios of new securities, which we plan to place in April. 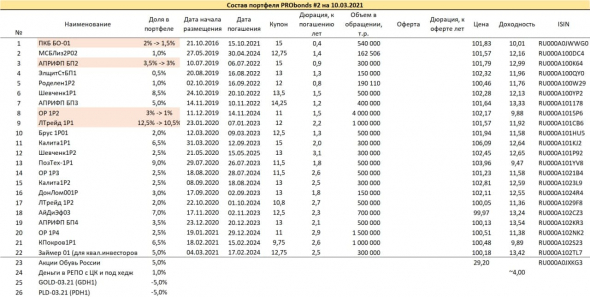 A few words about the speculative strategy of the PRObonds # 2 portfolio. The start of speculations in the fall of 2018 was very successful; by October 2019, they brought the portfolio about 4% of additional income. However, over the next year, by October 2020, some of the income was lost, but from that point on there is a gradual recovery. In just 2.5 years, speculative transactions brought the portfolio about 4.8% of additional income. This is not a minus, but very little. However, this year the speculative part has good opportunities, if not for success, then for activation. Most likely, there will be a minimum of deals, and they will be concluded in a bearish game on the American and Russian stock markets. Possible incl. and a game against oil, although the likelihood of such a deal is low.

Not an investment recommendation (https://www.probonds.ru/upload/files/15/35d1bb8a/Disklei%CC%86mer_dlya_portfelei%CC%86.pdf)